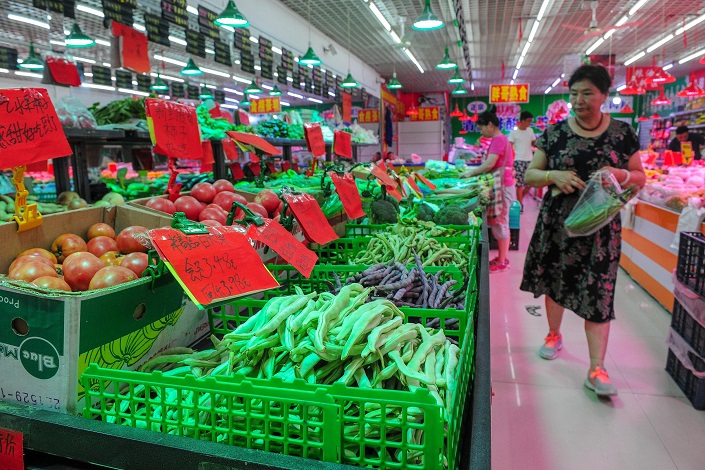 China’s consumer inflation didn’t budge from the month before in August, with the gauge remaining high as pork prices surged at their fastest pace in more than eight years, even as factory gate prices continued to drop due to falling raw material prices, official data showed Tuesday.

China’s consumer price index (CPI) rose 2.8% year-on-year in August, the same as the 17-month high seen in July, according to data (link in Chinese) from the National Bureau of Statistics (NBS). The CPI measures the prices of a select basket of consumer goods and services. The index came in higher than the median forecast for a 2.7% increase from a Bloomberg News survey of economists.

The average pork price increased 46.7% year-on-year amid fallout from the country’s ongoing African swine fever outbreak, contributing 1.08 percentage points to CPI growth. The increase in pork prices was the highest since July 2011 when the price grew 56.7% year-on-year.

China’s total pork production may decline by 15% to 20% in 2019 — a drop of 8 million to 10 million tons, Li Shuilong, president of the China Meat Association, estimated from public data.

Pork is the main meat consumed in China, accounting for more than 60% of the country’s total production, around 55 million tons in 2018. Since the first case of African swine fever was reported in Northeast China’s Liaoning province in August 2018, the virus has spread to every provincial-level region in China. In July, the number of pig livestock dropped more than one-third from the previous year, official data showed.

The government of Nanning, the capital of South China’s Guangxi Zhuang autonomous region, recently issued an administrative order to vendors to set a cap on prices for certain types of pork, in an effort to offset rising prices.

“Looking ahead, consumer price inflation should accelerate in the coming months as pig stocks continue to fall and the drag from lower oil prices eases,” economists with research consultancy Capital Economics said in a note. “But the upcoming RRR (reserve requirement ratio) cuts announced Friday are in line with our view that rampant food price inflation is not a barrier to monetary easing.”

The producer price index (PPI) posted a 0.8% year-on-year decline (link in Chinese) in August after the indicator dropped 0.3% the previous month, NBS data showed. The reading hasn’t been this low since August 2016, when the PPI also declined 0.8%. The PPI tracks the prices of goods circulated among manufacturers and mining companies. Economists polled by Bloomberg had given a median forecast for a 0.9 % decline.

“In our view, China’s monetary policy takes into consideration producer prices more than the headline CPI,” economists at ANZ Research said in a note. “(The) PPI is the best gauge of China’s business cycle and growth momentum as it reflects excess supply-demand of the industrial economy in a very timely manner.”

The current fluctuations in the CPI will barely influence China’s monetary policy, and the central bank is expected to cut money market rates in the fourth quarter of this year, they said.

Consumer inﬂation is likely to remain high in the coming months, but that won’t lead the central bank to raise rates, given still-mild core inﬂation, “although it could put some limit on rates declining too much,” economists with Goldman Sachs (Asia) LLC and Beijing Gao Hua Securities Co. Ltd. said in a note.