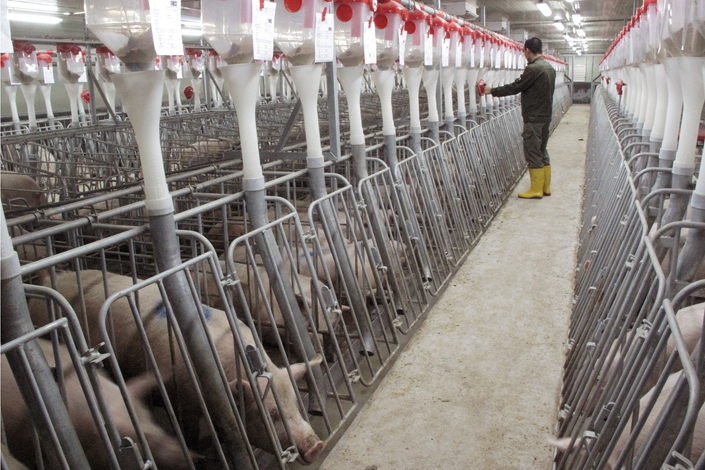 A worker checks on the sows at a large pig farm in South China’s Guangxi Zhuang autonomous region in December 2017. Photo: VCG

Pig stocks are dwindling and pork prices are rising as China grapples with the effects of the African swine fever outbreak that has officially resulted in the culling of more than 1 million pigs.

Li Shuilong, the president of the China Meat Association, estimates from public data that total pork production in China may decline by 15% to 20% in 2019 — a drop of 8 million to 10 million tons. Meanwhile, domestic pig prices continue to soar. A monthly analysis from June showed that “due to a continuous decline in pig stocks, pork supply has decreased, and prices have maintained an upward trend.” Prices continued to rise in July.

Dutch bank Rabobank released a forecast on Tuesday that said by the end of 2019 the size of China’s pig herds could be down by half, year-on-year, Reuters reported.

Pork is the main meat consumed in China, accounting for more than 60% of the country’s total production. Since the first case of African swine fever was reported in Northeast China’s Liaoning province in August, the virus has spread to every province, autonomous region and municipality in China.

A Caixin investigation released in early July revealed that localities have been reluctant to report cases in order to avoid paying out subsidies for culled pigs. In last-ditch attempts to mitigate losses, farmers sold sick pigs to slaughterhouses in different provinces, further spreading the virus. According to the investigation, there have been many more outbreaks than the officially reported number, and likely hundreds of thousands more pigs have died from African swine fever.

Since then, the Agriculture Ministry has announced that it would beef up controls and testing on the inter-provincial transfer of pigs in an effort to prevent the fever spreading further.

The central and provincial authorities are working to stabilize pork production and supply, according to a recent video conference by the ministry.

Local agriculture departments have also been taking measures to attempt to stabilize supply and pricing, as well as offering discount loans for farmers to encourage them to restock. For example, Guangdong province’s agriculture department issued a notice on Thursday saying that the number of live pigs on the market should not be lower than the goal stipulated in a 2018-2020 plan for the development of the industry. It also strengthened its financial support for the industry’s development, using funds provided by the central government to give pig farmers who are operating breeding grounds or those with operation licenses short-term cut-price loans.

Sichuan province, China largest pig-producing region, has also said it will increase financial support for pig farmers. On Thursday, the province’s agricultural department announced a program of low-interest loans for pig farms, mainly to allow them to purchase feed, as well as materials for sows and piglets.

The Guangxi Zhuang autonomous region, along with the provinces of Zhejiang and Jiangsu, have also released various measures to support pig breeding.