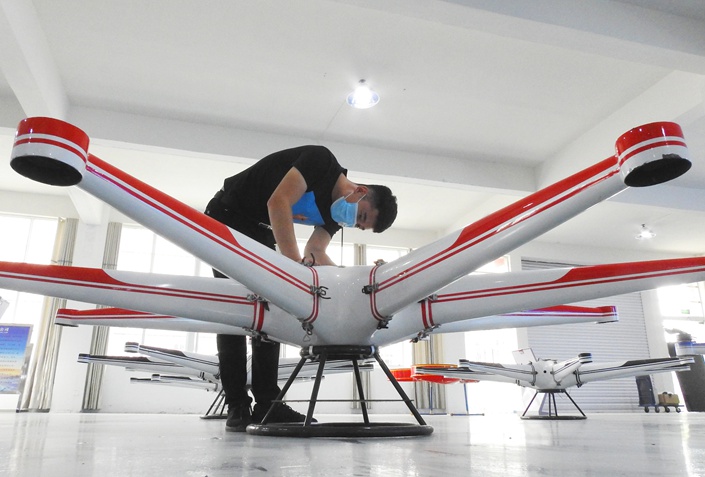 A worker installs a drone that can be used for logistics or surveillance at a factory in Lianyungang, Jiangsu province on Aug. 5. Photo: VCG

The country’s producer price index (PPI), which tracks the prices of goods circulated among manufacturers and mining companies, fell 0.3% year-on-year in July, according to data (link in Chinese) from the National Bureau of Statistics (NBS). The reading marked the first decline since August 2016, when the PPI was down 0.8%. The index came in lower than the median forecast of a 0.1% decline from a Bloomberg News survey of economists.

“This was largely the result of a further fall in raw material prices, reflecting the recent weakness in global commodity prices,” economists with research firm Capital Economics said in a note. “But the prices of manufactured industrial inputs also fell, which suggests that demand for Chinese industrial output is waning.”

They said producer price deflation is like to intensify in the coming quarters due to regulatory tightening on property construction and broader drags on industry from a wider slowdown in economic growth.

However, economists with ANZ Research said in a note that the depreciation of the yuan can help take the edge off some of the pressure because China is an import-dependent country whose producer prices are often influenced by the U.S. dollar exchange rate and so many commodities are priced in dollars.

On Monday, the yuan weakened past the psychologically important 7-to-the-dollar mark. This was due to unilateralism, trade protection measures and the U.S. threat to impose new additional tariffs on Chinese goods, the People’s Bank of China said later the same day.

The consumer price index (CPI), which measures the prices of a select basket of consumer goods and services, rose 2.8% year-on-year in July, NBS data (link in Chinese) showed. The reading was up from a 2.7% increase the month before and marked the highest level since February 2018. It exceeded the Bloomberg median forecast of a 2.7% rise.

The average price of fresh fruit jumped 39.1% in July, due to disrupted production and transportation caused by hot weather and heavy rain, according to an NBS statement (link in Chinese). The average price of pork rose 27% year-on-year amid the fallout from the country’s ongoing African swine fever outbreak, the fastest increase since June 2016, when the price rose 30.1%.

Accelerating consumer inflation will weigh on household confidence and real income growth, the economists from Capital Economics wrote. At the same time, a falling PPI will add to pressure on China’s already-shrinking manufacturing profits. Both have downbeat implications for the health of China’s economy.