Manufacturing Shrinks Again, but at a Slower Pace: Caixin PMI 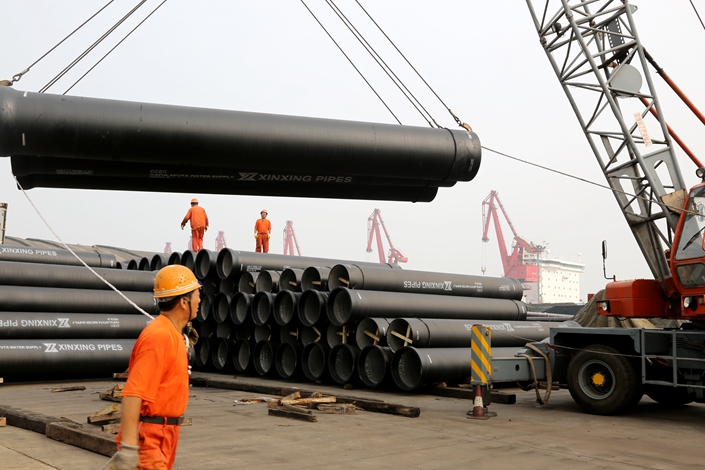 China’s manufacturing sector continued to contract in July, although at a slower pace, partly due to the broad stabilization of output, a Caixin survey showed Thursday.

The Caixin China General Manufacturing Purchasing Managers’ Index (PMI), which gives an independent snapshot of the manufacturing sector’s operating conditions, inched up to 49.9 in July from 49.4 in the previous month.

The Caixin index, one of the earliest available monthly indicators showing the latest economic conditions in China, is closely watched by investors. A reading of 50 divides expansion from contraction. The higher above 50 the faster the expansion, while the further below 50 the greater the contraction. Manufacturing accounted for nearly 30% of China’s gross domestic product in the first half of this year, according to government data (link in Chinese).

“China’s manufacturing economy showed signs of recovery in July,” said Zhong Zhengsheng, director of macroeconomic analysis with consultancy CEBM Group, a subsidiary of Caixin Insight Group. “Business confidence rebounded, reflecting the strong resilience in the economy. Policies such as tax and fee reductions designed to underpin the economy had an effect.”

The subindex for manufacturers’ output rebounded back to expansionary territory as some firms said that firmer demand had led them to keep production volumes unchanged, according to the survey.

New orders placed with goods producers increased marginally in July after declining in the previous month, while new export orders decreased at a slower pace, the survey showed. This indicates that domestic demand recovered and overseas demand was stable, Zhong said.

Manufacturers’ input costs increased at a slower pace in July than in the previous month, while the prices that they charge customers dropped for the first time in six months, the survey showed. This points to downward pressure on the profitability of downstream companies, Zhong said.

The employment subindex dipped further into contractionary territory, reaching the lowest since February, indicating the manufacturing sector’s weakening ability to absorb workers, according to the survey.

The gauge for future output expectations, which measures how optimistic or pessimistic manufacturers are about their production for the following 12 months, recovered from June’s record low to the highest in three months. But the measure remained subdued amid lingering concerns over the China-U.S. trade dispute and weaker global economic conditions, the survey said.

China’s official manufacturing PMI, released by the National Bureau of Statistics on Wednesday, rose to 49.7 in July, down from June’s reading of 49.4.

The Caixin manufacturing PMI, sponsored by Caixin and compiled by London-based data analytics firm IHS Markit Ltd., focuses on light industry, while the official one focuses on heavy industry. The geographic distributions of the companies covered in the two surveys are also different.

The Caixin China General Services Business Activity Index for July, which tracks the growing services sector, will be released on Monday.