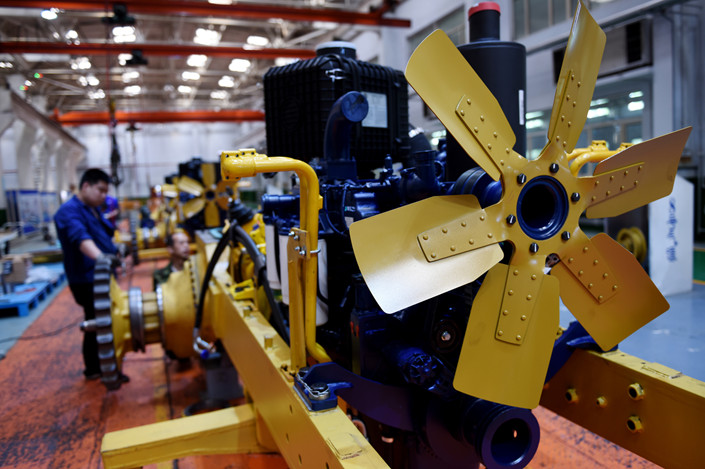 Chinese manufacturing contracted in June for the first time in four months as new orders decreased amid reports of trade tensions, a Caixin survey showed Monday.

The Caixin China General Manufacturing Purchasing Managers’ Index (PMI), which gives an independent snapshot of the manufacturing sector’s operating conditions, dipped to 49.4 in June from 50.2 in May, indicating a marginal deterioration. It’s the lowest reading since January for the sector, which accounts for about 30% of China’s gross domestic product.

The Caixin index, one of the first available monthly indicators showing China’s latest economic conditions, is closely watched by investors. A reading of 50 separates expansion from contraction. The higher above 50 the faster the expansion, while the further below 50 the greater the contraction.

The subindex for output dipped into contractionary territory, its lowest since January. Purchasing executives who took the survey linked the fall to trade tensions with the U.S., which has resulted in some production lines being halted.

The subindex for new orders dropped into contraction, hitting its lowest mark since January. Zhong said the decline pointed to a notable shrink in domestic demand. The gauge for new export orders returned to contractionary territory, but the reading was better than the levels seen from April 2018 to December 2018, a change which was likely supported by front-loading exports as the China-U.S. trade relationship was under great uncertainty, Zhong said.

The gauge of future output — which measures sentiment towards future output — dipped to its lowest since April 2012, when the gauge was first reported. Zhong said this reflected continuously weakening business confidence amid the Sino-U.S. trade conflict.

China’s official manufacturing PMI, released by the National Bureau of Statistics on Sunday, stood at 49.4 in June, unchanged from the month before. The Caixin manufacturing PMI, sponsored by Caixin and compiled by data analytics firm IHS Markit Ltd., focuses on light industry, while the official one focuses on heavy industry. The geographic distributions of the companies covered in the two surveys are also different.

The Caixin China General Services Business Activity Index for June, which tracks the growing services sector, will be released on Wednesday.