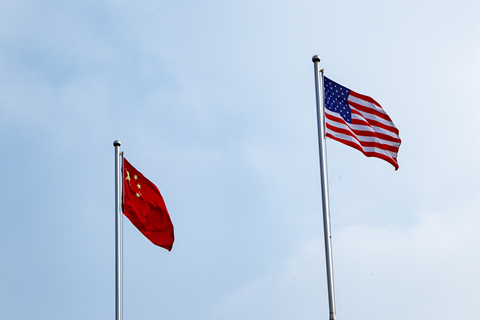 Tensions between China and the U.S. re-escalated after the last round of talks faltered in May. Photo: VCG

Trump said on Twitter that he had a “very good” telephone conversation with Xi and that the two will have “an extended meeting” next week at the G-20. “Our respective teams will begin talks prior to our meeting,” he said.

Shortly after the tweet, China’s state broadcaster quoted Xi as saying he is willing to meet with Trump during the June 28-29 summit in Osaka to communicate on “fundamental issues” regarding the development of China-U.S. relations. The two countries should solve trade and economic issues through fair conversation and take care of each other’s concerns, Xi told Trump, according to China Central Television.

“We hope the U.S. can treat Chinese companies fairly,” Xi said. “I agree that trade representatives of the two countries should maintain communication to solve disagreements.”

The meeting in Japan, which hadn’t officially been scheduled, is expected to provide an opportunity for another ceasefire after the trade war escalated in recent months. The two presidents’ previous face-to-face meeting last December in Argentina resulted in a truce during which officials from the two sides held negotiations.

But after the last round of talks faltered in May, Trump ordered a tariff increase to 25% from 10% on $200 billion a year of goods and targeted an additional $300 billion in products for duties. China fought back with its own levies. Each country has blamed the other for the setbacks in talks.

The re-escalation of the trade tension has taken toll on both economies. The International Monetary Fund earlier this month lowered its forecast for China’s growth this year to 6.2% from 6.3% on “uncertainty around trade tensions,” shortly before the country reported weaker-than-expected investment and industrial data for May.

Meanwhile, business groups in the U.S. have been urging the Trump administration to ease the tariff fights, citing damage to businesses and households.

Timothy Stratford, chairman of the American Chamber of Commerce (AmCham) in China, Monday published a public letter urging the two countries to stop blaming each other and “get back to the negotiating table.”