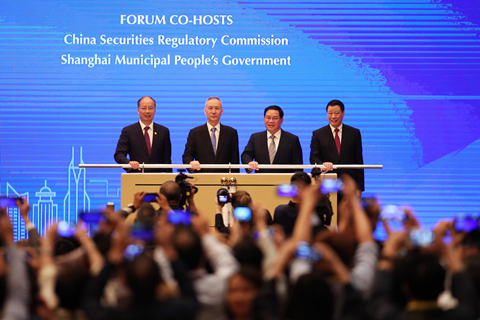 Liu He called for regulators to step up financial support for the economy and keep reasonably ample liquidity in the financial system. Photo: VCG

China’s chief trade negotiator acknowledged that the nation faces “external pressures” but said such pressures can in fact help with economic development.

“Right now, we do face some external pressures, but this is the inevitable test that China’s economic restructuring must experience,” Vice Premier Liu He told a financial forum Thursday in Shanghai. “The external pressure will help us speed up reform and opening-up and achieve high-quality growth.”

Liu didn’t directly mention the U.S.-China trade war, but he led several rounds of trade talks with the U.S. The most recent round collapsed last month without a deal.

Liu said Beijing has plenty of policy tools and is capable of dealing with various challenges.

Liu said it’s normal for China’s financial system to incur some risks, and now that most of them have been exposed, incremental additional risks are effectively under control.

The vice premier called for regulators to step up financial support for the economy and keep reasonably ample liquidity in the financial system.

Liu stressed that the next phase of financial work will focus on serving the real economy, accelerating the improvement of financial services, meeting the needs of businesses in the central and western areas and of hi-tech enterprises, and mitigating financing challenges facing small and micro businesses.

The government will further accelerate reform and opening-up, especially in market access, fair competition and protection of property, especially intellectual property, he said.

At the forum, Liu also commented on the launch of China’s new high-tech board, which is officially open for business. He said the new board’s most important function is to ensure “marketization” and “rule of law.”

It is necessary to implement the registration-based system for equity listings with sufficient information disclosure, and truly let the market decide, Liu said. Cracking down on false accounting information will be crucial, he said. Liu pointed out that credit plays a central role in the capital market, and it’s crucial to build and maintain the information disclosure system.

Liu called for regulators to accelerate the reform of stock listing and delisting systems, improve the quality of listed companies and help foster institutional investors.

The following are key points taken from the Powerpoint slides used in Liu He's presentation:

Sarah Price contributed to this report.