Tech Board Launches, With Trading Likely to Start Within Two Months 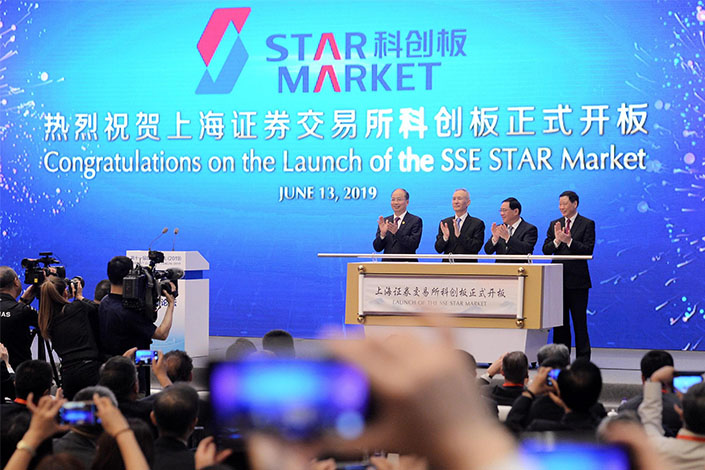 Officials applaud the launch of the Shanghai Stock Exchange’s new high-tech board, the SSE STAR Market, on Thursday in Shanghai. Photo: VCG

China’s new high-tech board is officially open for business, Yi Huiman, chairman of the China Securities Regulatory Commission (CSRC), said Thursday in Shanghai, adding that problems may surface along the way.

Trading has yet to begin. The first batch of companies is likely to start trading on the board within two months, said Huang Hongyuan, chairman of the Shanghai Stock Exchange (SSE), which hosts the board.

The high-tech board, now called the SSE STAR Market, was proposed by President Xi Jinping in November to improve the Chinese mainland’s appeal to technology companies and encourage them to list on the mainland instead of overseas.

A key change is the shift to a market-based registration system for new listings that aims to resolve shortcomings in the current lengthy, bureaucratic initial public offering (IPO) process that candidates face on other mainland boards, where listings can take months or even years.

As such, investors will pay attention to changes brought by the new board, Yi said at the Lujiazui Forum, an annual gathering of senior financial regulators, experts and market participants. The registration-based mechanism might see more regular delisting cases and higher IPO prices, he said.

Also, the potential limited supply of listed companies in the board’s early days might lead to speculation or greater price fluctuations, and investors should closely follow the information disclosed by the companies as innovative technology firms by nature tend to move faster and be subject to greater uncertainty, Yi said.

To offset such risks, regulators have “done their best to evaluate and improve the system and have prepared corresponding plans,” Yi said.

He added that board will continue to improve as it operates and hoped everyone involved would remain rational in dealing with any problems that might emerge.

Vice Premier Liu He also said at the forum that the new board’s most important function is to ensure “marketization” and “rule of law.” It is necessary to implement the registration-based system with sufficient information disclosure, and truly let the market decide, he said adding that cracking down on false accounting information would be crucial.

Under the registration-based system, regulators will no longer set rigid requirements for listing candidates on issues such as profitability. Instead, authorities will review company materials to ensure their disclosures are adequate and accurate.

So far, 123 companies have filed applications for listing on the high-tech board. As of Thursday, nine companies have obtained consent documents from the SSE, and six of them have already filed for IPO registrations and are waiting for the CSRC to sign off. Twelve more companies will be reviewed by the end of next week. It’s widely expected that about 30 companies will get the green light as part of the first batch of companies to go public on the new board.

According to CSRC rules, upon receiving the consent documents issued by the SSE after reviewing the listing, applicants’ listing registrations will be filed with the CSRC. The securities regulator then has up to 20 working days to decide whether to agree to the registrations. Once that is given, the companies have one year to list.

The SSE is set to put the new board through a final technical test run Saturday. Passing the test would mean the board is ready for formal trading at any time, a tech staffer at a brokerage firm said.