China to Launch Nasdaq-Style Board in Shanghai 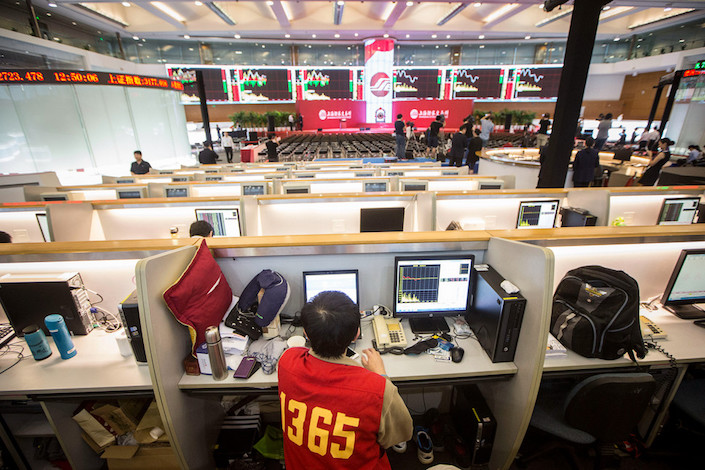 A trader sits in front of a computer at his work station at the Shanghai Stock Exchange.Photo: VCG

China will launch a high-tech stock board in Shanghai and experiment with a registration-based initial public offering system, Chinese President Xi Jinping said Monday at the opening of the China International Import Expo in Shanghai.

The announcement of the “technology innovation board,” to be established by the Shanghai Stock Exchange, is seen as a move by the government to boost business confidence amid slowing economic growth and mounting U.S. tariffs. The new trading venue could be modeled on the wildly successful Nasdaq Stock Market in the U.S., whose listings include Amazon, Apple, and Microsoft.

Xi’s speech included other opening-up measures but gave few details on the board. Shortly after the president’s remarks, the China Securities Regulatory Commission (CSRC) posted an article in a question and answer format on its website, explaining the technology innovation board but still lacking specific plans.

The move may indicate that money-losing startups will be allowed to list shares on the new board, though the CSRC provided no listing criteria in the article. Such companies are currently not allowed to list on the mainland, including on the existing ChiNext board in Shenzhen, which also caters to start-ups.

“Establishing a technology innovation board and testing the registration system is an important reform measure to increase the market’s ability to serve innovative enterprises and strengthen the market’s inclusiveness,” the Shanghai stock exchange said Monday in a separate statement.

The exchange said that the new board will make “more appropriate and differentiated arrangements” regarding companies’ profitability and shareholding structures and will be more inclusive of innovative start-ups.

The ChiNext board, which is celebrating its ninth anniversary this year, attracted more than 700 listed companies by the end of October with a total market value of 4 trillion yuan. High-tech start-ups accounted for more than 90% of the listed companies.

But to be listed on the ChiNext, enterprises must show a profit in the two most recent years, with an accumulated profit of no less than 10 million yuan.

The Shanghai exchange said the next step will be working out the specific rules and supporting systems under the supervision of the CSRC.

The so-called registration-based IPO system aims to remove regulatory hurdles and speed up the IPO process, as the current system has often resulted in long queue of companies awaiting approval.

The CSRC said it has sufficient legal basis to experiment with the registration system as the Standing Committee of the National People's Congress, the top legislature, authorized a registration-based IPO system in December 2015.

But analysts pointed out that while neither the new board nor the registration system is a new topic, both will require legal and institutional support, which could take time to go into effect.

Chanson Capital Executive Director Shen Meng told Caixin that Xi’s announcement is more like a call-out to boost business confidence because it’s unlikely that the new board would be established smoothly in a short time.

There will be conflicts between the proposed technology innovation board and Shenzhen’s ChiNext board. It’s still not clear how to differentiate the two boards and promote benign competition, Shen said.

The regulator hasn’t specified a threshold for investors eligible to participate in the new board. To trade on the ChiNext board, investors must have two years’ experience in stock trading.