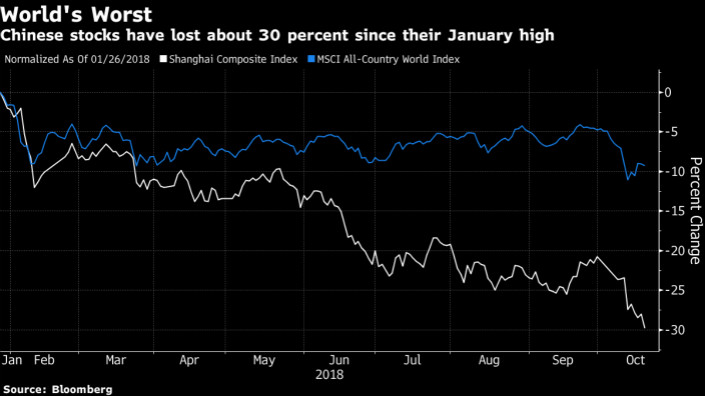 Fears of widespread margin calls fueled a 3% tumble in the Shanghai Composite Index, which sank to a nearly four-year low as more than 13 stocks fell for each that rose. Efforts by local governments to shore up confidence in smaller companies failed to boost sentiment. The yuan sank beyond its closely watched August low after the U.S. Treasury Department stopped short of declaring China a currency manipulator, a move that some interpreted as giving Beijing breathing room to allow a weaker exchange rate.

Chinese policy makers face a tough balancing act as they try to maintain financial stability amid slowing economic growth, a trade war with America and rising U.S. interest rates. Beijing has so far refrained from major market rescue efforts of the sort that followed the nation’s 2015 equity crash, but some investors are calling for bolder action. With $603 billion of shares pledged as collateral for loans, or 11% of China’s market capitalization, one concern is that forced sellers will tip the market into a downward spiral.

While the so-called national team of state-backed funds has intervened to support the market in the past, efforts recently have been led by local governments. Officials in the southern cities of Shenzhen and Shunde as well as Beijing’s Haidian district have moved to help listed firms in their areas, according to local authorities and media reports. At least 36 companies have seen pledged shares liquidated by brokerages since the start of June, according to company filings.

The Shanghai Composite closed at 2,486, its lowest finish since November 2014. The gauge has slumped about 30% from a January high.

Federal Reserve minutes on rate increases and news the U.S. plans to withdraw from a postal treaty favorable to Chinese companies added to the bearish sentiment, as did renewed weakness in the yuan. The currency traded in a tight range in the days leading up to Treasury’s semi-annual report on foreign-exchange markets, helping to buoy risk sentiment globally. But on Thursday, the People’s Bank of China weakened its daily fixing by 0.25%. The yuan dropped as as much as 0.3% to 6.9422 per dollar.

“There was a minority in the market who bet China would want to aggressively resist yuan depreciation to avoid being called a currency manipulator,” said Frances Cheung, head of macro strategy for Asia at Westpac Banking Corp. in Singapore. “The Treasury report means that bet is off. We think China would be comfortable with more weakness as long as it’s driven by the strong dollar.”