By Xu Heqian and Han Wei 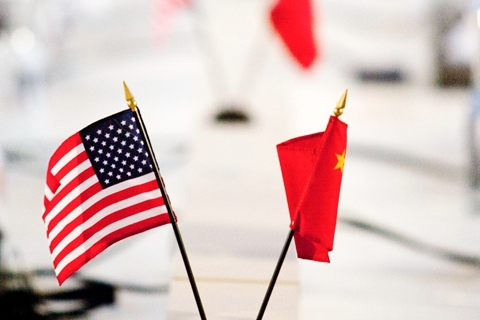 Trade tensions re-escalated between China and the U.S. after talks faltered in May. Photo: VCG

A leading business group representing American companies is calling for leaders in Washington and Beijing to “get back to the negotiating table” to break the trade logjam between the world’s two largest economies.

The June 28-29 meeting of the G-20 meeting in Osaka, Japan, will provide “the perfect opportunity” for the two countries to make “a return to serious and professional negotiations and an immediate de-escalation of the public blame game,” wrote Timothy Stratford, chairman of the American Chamber of Commerce (AmCham) in China, in an open letter published on the chamber’s website.

Market observers see a meeting between U.S. President Donald Trump and Chinese President Xi Jinping in Osaka as an opportunity for another ceasefire after the trade war escalated in recent months. The two presidents’ previous face-to-face meeting last December in Argentina resulted in a truce during which officials from the two sides held negotiations.

But after the last round of talks faltered in May, Trump ordered a tariff increase to 25% from 10% on $200 billion a year of goods and targeted an additional $300 billion in products for duties. China fought back with its own levies. Each country has blamed the other for the setbacks in talks.

The hostilities are also spreading to technology and business fronts. Washington last month put Huawei on a blacklist that effectively bars American companies from selling goods to Huawei without government approval. China’s Commerce Ministry said it would launch its own “unreliable entity list” to target foreign companies that damage Chinese companies’ interests for noncommercial reasons.

Rising tensions have cast a shadow over both economies. The International Monetary Fund earlier this month lowered its forecast for China’s growth this year to 6.2% from 6.3% on “uncertainty around trade tensions,” shortly before the country reported weaker-than-expected investment and industrial data for May.

The Huawei ban, which Trump said could be part of the trade negotiations, is expected to cost $30 billion in lost sales for the company, founder Ren Zhengfei said.

American companies are also feeling the pinch. Last week, more than 500 companies including the retailers Walmart Inc., Target Corp. and Macy’s Inc. signed a joint letter to Trump warning that additional tariffs on China would hurt American businesses and households.

An AmCham survey in March found that most American companies said the tensions are influencing their long-term business strategies, and many are delaying China investments.

Assigning blame for the breakdown to each other will only impede the two countries’ ability to achieve strategic objectives to put their relationship on a more balanced and sustainable path, Stratford said in the letter.

“We should go in fact in the other direction, adopting a steady and professional diplomacy seeking to restore trust and make communication clearer,” he wrote.

The U.S. and China should recognize that differences in their political systems and cultures and linguistic barriers genuinely complicate negotiations, Stratford said.

“We will not resolve all issues in one negotiation, so the two governments will need to show that they are committed to continue to work in a steady and respectful manner,” he said.

Recent developments including a mutual affirmation of personal friendship between Trump and Xi and cordial discussions between Secretary of the Treasury Steven Mnuchin and People’s Bank of China Governor Yi Gang have given rise to hopes for possible further negotiations, Stratford said. The two countries should seize upon opportunities to “dampen the emotion while resuming negotiations,” he said.

“Presidents Trump and Xi, now is the time to agree to resume negotiations: Please do not try to back the other side into a corner, and instruct your trade negotiators to hammer out a deal that can last long into the future,” Stratford wrote.