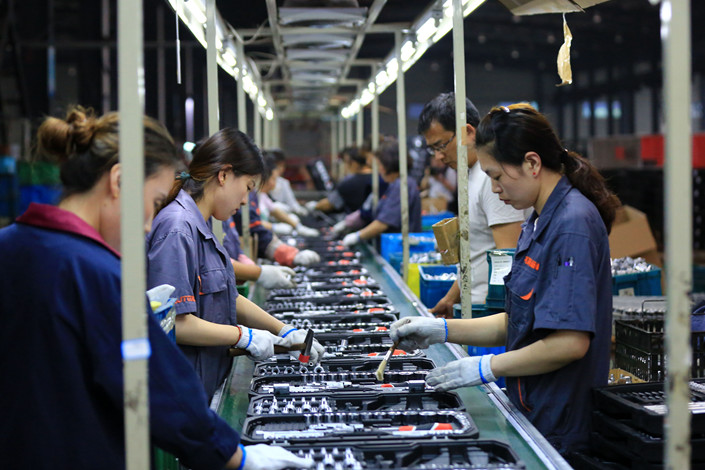 Employees work at a tool manufacturer in East China’s Jiangsu province on May 26. Photo: IC Photo

China’s manufacturing activity expanded for a third straight month in May with new orders increasing at a faster clip than the previous month, a Caixin survey showed Monday, even as manufacturers’ confidence fell to the lowest level since 2012.

The Caixin China General Manufacturing Purchasing Managers’ Index (PMI), which gives an independent snapshot of the manufacturing sector’s operating conditions, came in at 50.2 in May, unchanged from 50.2 the previous month, suggesting ongoing improvement in the sector.

Manufacturing accounts for nearly 30% (link in Chinese) of China’s gross domestic product. The Caixin index, one of the earliest available monthly indicators showing the latest economic conditions in China, is closely watched by investors. A reading of 50 divides expansion from contraction. The higher above 50 the faster the expansion, while the further below 50 the greater the contraction.

“Overall, China’s economy showed steady growth and resilience in May. The manufacturing sector saw demand rise from both overseas and domestic markets, and prices were stable,” said Zhong Zhengsheng, director of macroeconomic analysis with consultancy CEBM Group, a subsidiary of Caixin Insight Group.

New orders increased at a faster pace than the previous month, while new export orders returned to expansionary territory and increased at a pace not seen since January, which was the best reading since March 2018. That suggests demand was improving from both home and abroad.

The gauge for input prices edged up while that for output prices edged down to the lowest level since January, which indicates that “while prices of manufactured goods remained relatively stable, enterprises are facing pressure from rising raw material prices,” Zhong said in a note.

The future output index, which measures how optimistic manufacturers are about production a year ahead of time, dropped to the lowest in data going back to April 2012, the survey showed, amid escalating China-U.S. trade tensions and forecasts of relatively subdued global demand.

“The trade tensions between the U.S. and China are having an impact on confidence, and the best way to respond to this is to boost the confidence of enterprises, residents and capital markets by carrying out favorable reforms and to undertake timely adjustments to regulations and controls,” Zhong said.

China’s official manufacturing PMI, released by the National Bureau of Statistics on Friday, fell to 49.4 in May from 50.1 the month before. The Caixin manufacturing PMI, sponsored by Caixin and compiled by data analytics firm IHS Markit Ltd., focuses on light industry, while the official one focuses on heavy industry. The geographic distributions of the companies covered in the two surveys are also different.

The Caixin China General Services Business Activity Index for May, which tracks the growing services sector, will be released on Wednesday.