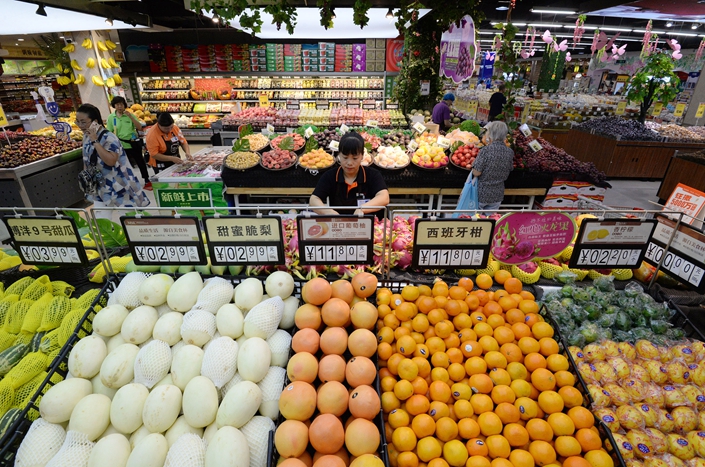 Fruit is seen at a supermarket in Handan, in northern China's Hebei province, on July 10. Photo: IC Photo

The consumer price index (CPI), which measures the prices of a select basket of consumer goods and services, rose 2.7% year-on-year in June, the same growth as the month before, which had marked the highest level since February 2018, according to data (link in Chinese) from the National Bureau of Statistics (NBS). The reading met the median forecast from a Bloomberg News survey of economists.

The producer price index (PPI), which tracks the prices of goods circulated among manufacturers and mining companies, posted zero year-on-year growth in June, down from a 0.6% increase in the previous month, NBS data showed (link in Chinese). The reading missed the economists’ median forecast of a 0.2% increase and marked the lowest since August 2016.


The average price of fresh fruit soared 42.7% year-on-year in June, more than one-and-a-half times the growth of 26.7% in the previous month and hitting the highest level since June 2006, NBS data showed. NBS official Dong Yaxiu attributed (link in Chinese) the sharp rise chiefly to a low comparison base a year earlier and heavy rains in southern China, which hit the fruit harvest and interfered with transporting the harvest.

The average price of pork rose 21.1% year-on-year last month amid the fallout from the country’s ongoing African swine fever outbreak. The price increase is up from an 18.2% rise in May, hitting the highest level since June 2016.

“With pig stocks still tumbling we think increases in consumer prices will start to accelerate again before long,” economists with research firm Capital Economics said in a note. A further rise in CPI growth will not prevent China’s central bank from loosening monetary policy as supply disruptions are chiefly to blame, they added.

The PPI fell 0.3% month-on-month in June, down from a 0.2% rise in May, NBS data showed. This reflects weaker domestic demand, Nomura economists said.