By Isabelle Li and Li Liuxi 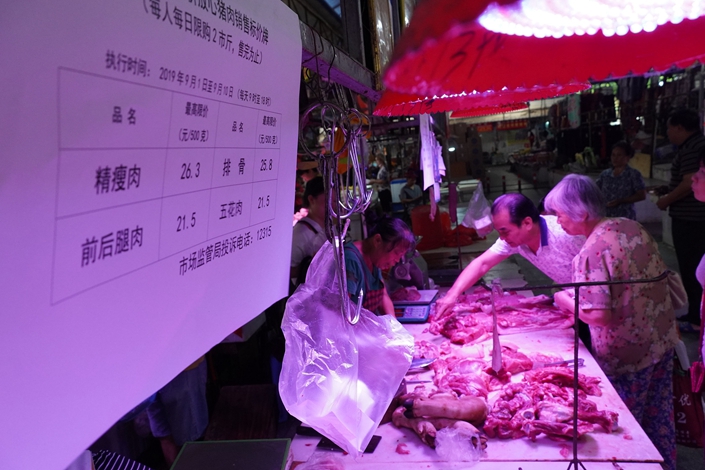 The city of Nanning has issued an administrative order to vendors to set a cap on pork prices starting from Sunday, as well as subsidies to help them do so, according to the government-run Nanning Daily. Every morning before 9 a.m., vendors in 10 major farm produce markets scattered across the city’s eight districts will sell pork at an at least 10% discount to the average price of the previous 10 days. Each consumer is limited to buying up to 1 kilogram of the discounted pork. The amount of discounted pork will be limited to one pig’s worth per vendor per day.

Pork prices in those markets will be subject to a different cap ranging from 19 yuan ($2.74) to 32.2 yuan per 500 grams (1.1 pounds), depending on the market’s location and the type of pork, according to a document released on the municipal government’s website.

The government will adjust the price cap every 10 days, and there is no clear timeline for when the intervention will end, the Nanning Daily reported. The measures are likely to last until pork prices stabilize, officials told the local newspaper.

The measures have left local residents waiting in line for a shot at the discounted meat. Because the supply of discounted pork is limited, some markets note down purchaser’s name and phone number and others distribute tickets to ensure each buys no more than the individual limit.

The outbreak of African swine fever, which is fatal to pigs but does not affect humans, was first reported in China in August 2018 in the northeastern province of Liaoning and then spread to all 31 provincial-level regions on the Chinese mainland by this April.

Amid the fallout from the outbreak, pork prices have soared in the country over the past few months as the supply of live hogs has shrunk.

According to statistics released on Friday by commodity price officials in Nanning, pork prices ranged from 25.75 yuan to 32.75 yuan per 500 grams, or 1.5 to 2.6 times as much as prices in June. The domestic price of live hogs in July also jumped by more than 20%, according to multiple local media reports.

Besides capping pork prices, Nanning is also taking urgent measures to help revive hog breeding. On Monday, the city announced that it would release 20 million yuan as an emergency grant to subsidize sizeable farms to resume pig breeding.

Pork accounts for the biggest share of the food portion of China’s consumer price index (CPI), a measure of consumer inflation that economic policymakers keep a close eye on. Consequently, a jump in pork prices can cause the CPI to increase. The government has not released the weighting of different items in the basket of goods and services used to calculate the CPI, but analysts widely estimate that food accounts for about 30% of the overall index.

In July, the latest data from the National Bureau of Statistics showed that pork prices surged 27% from the previous month, while the CPI rose 2.8% year-on-year.