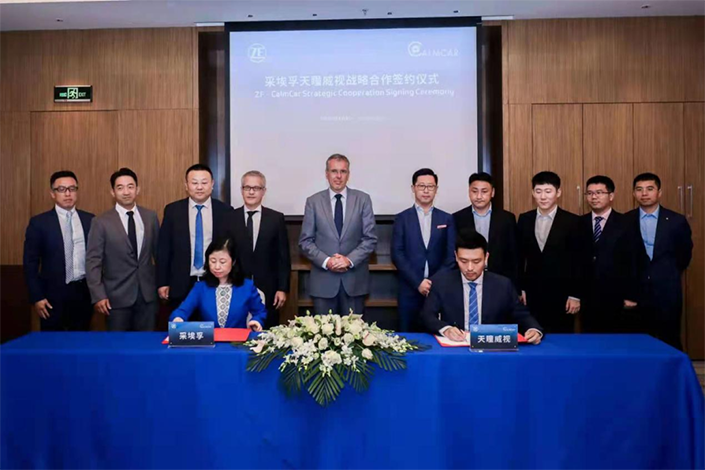 CalmCar, a Tianjin-based startup that specializes in developing vision systems for autonomous vehicles, has raised $150 million in a series C funding round led by German auto-parts maker ZF Friedrichshafen AG as the Chinese company aims to begin its IPO process by 2022.

The new funds will be used to expand the mass production of its software and hardware products used in Level 2 to Level 4 self-driving vehicles, according to the statement.

Level 4 technology is what most self-driving car companies are focusing on developing, being the standard that U.S. engineering standards group SAE International identifies as features that allow a vehicle to drive itself under certain conditions but only if all those conditions are met. Level 5 is the highest attainable level of automation according to SAE.

Founded in 2016, CalmCar uses artificial intelligence to develop machine vision systems for use in areas like autonomous driving, robotics, smart transportation and public security. Its two flagship products are a 360-degree sensor system to detect moving objects, traffic lights and lane lines around a car, and a monitoring system that sounds an alert when a driver shows signs of fatigue, makes a phone call or smokes.

CalmCar said that it has R&D facilities in Tianjin, Beijing and Detroit, staffed by a team of more than 150 engineers in total.

In June, CalmCar signed a deal with ZF to jointly develop budget automated parking assistance and automated valet parking systems that they expect to install in cars on a large scale in China next year. ZF has also teamed up with TuSimple, a self-driving truck-maker that focuses on the China and U.S. markets, to develop a central computing platform for driverless rigs.

This story has been updated to adjust the list of investors that participated in CalmCar’s latest funding round. According to an updated statement from the company, they include Dragonstone Capital Management, Great Filter Venture and OCI International.