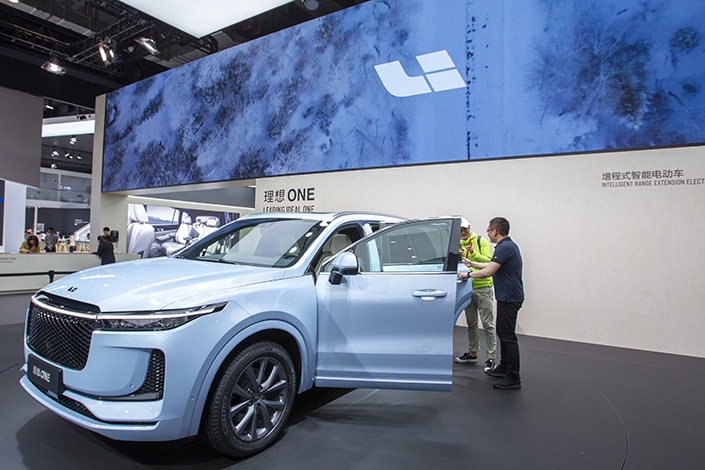 Electric car on display at an industry event in Shanghai in April 2019.

China’s installed nonfossil fuel power capacity is expected to surpass that of coal-fired electricity generation for the first time by the end of 2021, according to a report published Friday by the China Electricity Council (CEC). The council estimated that China will have installed generating capacity of 2,370 gigawatts (GW) by year-end, up 7.7% from a year earlier. Capacity based on nonfossil fuels — such as hydropower, wind and solar power — will reach 1,120 GW, accounting for 47.3% of total generating capacity, while coal-fired power capacity will total 1,100 GW. Coal will retain a significant role in guaranteeing stable electricity supply in China, especially during the peak consumption season. The CEC forecast that China’s electricity consumption in the second half will rise 6% from a year ago, making the increase in full-year usage 10%–11% from 2020.

GAC Toyota Motor Co. Ltd., a Guangzhou-based joint venture between Guangzhou Automobile Group and Toyota Motor Corp., put the first phase of its new-energy vehicle (NEV) capacity expansion into operation in Nansha District in the southern Chinese megacity of Guangzhou. The plant will have capacity to produce 200,000 NEVs a year.

The upward momentum in China's steel scrap prices will be capped in coming months as more steelmakers start cutting production in compliance with government orders. China pledged to limit crude steel output in 2021 to last year’s 1.065 billion tons. China’s crude steel output in the second half will have to decline by 11% from a year earlier to 502 million tons to hit the target.

China may include traditional industries and transport in carbon market

An official of the China Securities Regulatory Commission said China will gradually expand industries in the national carbon market to include traditional industries and the transport sector.

China to release timetable and road map for carbon neutrality

China is formulating a timetable and road map for carbon neutrality that will be published soon, Xie Zhenhua, China's special envoy for climate change, said Saturday at a Global Asset Management Forum.

Chinese planners will abandon their previous practice of issuing separate five-year plans for different forms of new energy in favor of a joint renewables package with a stronger emphasis on solar power, an energy official said Thursday. The draft plan will also focus on competition with a view to weaning the industry off government subsidies.