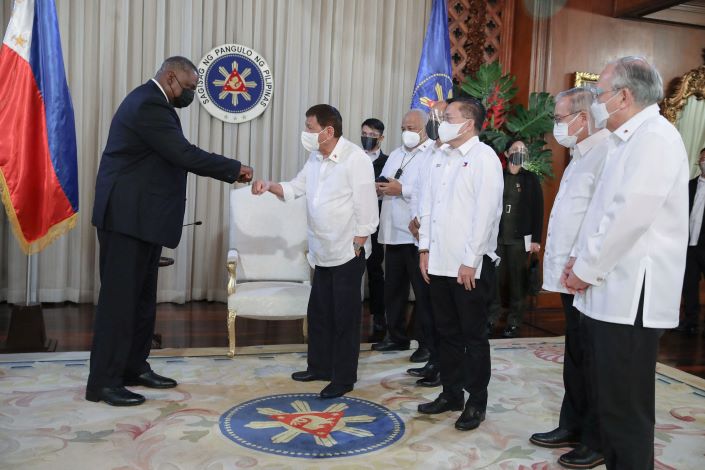 The US has dispensed these "medical miracles"― as described by visiting US Defence Secretary Lloyd Austin ― while its senior officials tour East Asia to reassure allies of its commitment to the region under President Joe Biden's administration.

The diplomatic drive comes as evidence suggests that mRNA vaccines such as Pfizer's and Moderna's do better against the Delta variant now wreaking havoc across the region.

Yet, there are also misgivings on the ground about how late Washington got into the act.

A recipient of Chinese, Indian and Japanese vaccine donations earlier, Cambodia has raced well ahead of its neighbours in the bid to achieve herd immunity. As at Thursday, it has fully vaccinated 4.7 million of its 16 million population, largely with Chinese-made Sinopharm and Sinovac vaccines.

Yet, progress in Cambodia is now being threatened by the growing number of infections, with the national tally at 76,585 so far. On Friday, the Cambodian government imposed a 9pm to 3am curfew in the capital, Phnom Penh, and locked down provinces neighbouring Thailand in a bid to stop the transmission of the virus.

Addressing the perception that the US was playing catch-up with China in gifting vaccines, Michael Heath, charge d'affaires at the US Embassy in Bangkok, told reporters on Friday that Washington had to deal first with the pandemic within its own borders.

Then, in a slight dig at Chinese vaccine manufacturers like Sinovac, Heath said: "Very rigorous trials had to be conducted on these vaccines to make sure, first of all, that they were safe, and then to make sure that they were effective. And so by the time all the data had been gathered transparently and published for peer review… our vaccines were ready to be donated to the rest of the world."

Washington says there are "no strings attached" to these donations, no doubt again trying to set it apart from China. In May, a month before Thailand's mass vaccination programme took off, Chinese nationals in Bangkok received Sinovac shots donated by Beijing under its "Spring Sprout" programme.

A similar agreement was reached for 500,000 doses of Sinopharm vaccines that China donated to Vietnam in June, where priority was given to Chinese nationals in Vietnam, Vietnamese who need to work in China, as well as people living in northern Vietnam near the Chinese border.

Myanmar, meanwhile, is trying to contain a raging outbreak that has led to pile-ups of bodies at Yangon crematoriums. Beijing this month donated two million doses of the Sinopharm vaccine. Priority for these vaccines, said the Myanmar junta, would go to those living near the border with southern China.

Washington's "no conditions" vaccine donations have their own detractors. Americans in Thailand who have long demanded that Washington send vaccines to them are upset that they will not get first dibs on the Pfizer jabs. Thais, who are worried that the moneyed elite would try to jump the queue, have been calling for the US to ensure that the vaccines are distributed fairly - to no avail.

On Friday, Heath insisted that this was the responsibility of the Thai government.

A similar story is playing out in Vietnam, where Ho Chi Minh City authorities were forced to publicly justify why they agreed to "lend" 5,000 doses of donated Moderna vaccine to Vingroup, the biggest private conglomerate in the country.

Larger strategic considerations are at play, of course, despite the "no conditions" label, as Le Thai Ha, a director of research at Fulbright University Vietnam, pointed out.

She said: "Vaccine donations involve economic matters, and donations are likely to reach countries where the donors have strategic interests."

Vietnam is the second-largest supplier of textiles and footwear to the US market, for example, but businesses supplying brands such as Nike have been seriously affected by current lockdown measures.

"Without vaccines, there is no way for workers to return to work safely," she said. "This can lead to considerable economic losses to both the Vietnamese and American economies."

Analysts say the growing clamour for mRNA vaccines may work in Washington's favour. But, with the vast majority of Southeast Asia still unvaccinated and regional capitals in lockdown mode, few vaccine recipients may have the luxury of choice.

Cambodian international relations scholar Sok Udom Deth said: "While some people question the effectiveness of Chinese vaccines, the general public seem to accept the fact that any vaccine is still much better than no vaccine."