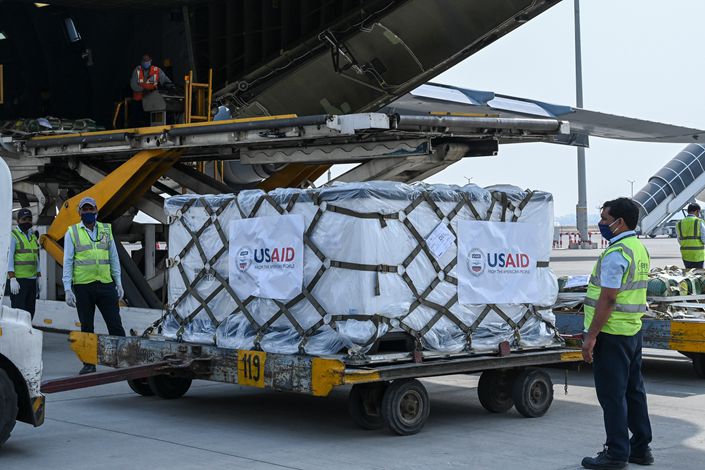 By helping its neighbor fight Covid-19, China is aiming to protect itself in the battle against the pandemic, while also trying to mend fences with India following the deadly border skirmish last year, according to experts interviewed by Caixin.

On Sunday, Chinese Ambassador to India Sun Weidong said on social media that the Red Cross Society of China’s (RCSC) initial donation of 100 oxygen concentrators, 40 ventilators and other medical supplies had arrived in India.

Sun also said the RCSC decided to provide $1 million in cash assistance to the Indian Red Cross Society to help the country fight the pandemic.

Since April, China has exported more than 21,000 oxygen generators, 5,000 ventilators, 21 million masks, and around 3,800 tons of medicine to India, Sun said on social media, citing statistics from China’s General Administration of Customs.

Local hospitals in major cities like New Delhi are running out of oxygen and people are making desperate calls for oxygen on every major social media platform.

Shrenik Rao, publisher of news website Madras Courier, said that his uncle managed to survive after spending two days on oxygen after his blood oxygen levels fell dangerously low. “There are a lot of people who can pull through if they get oxygen. But now people cannot get access to oxygen anywhere; hospitals don’t have oxygen,” Rao told Caixin.

Beijing has also stepped up diplomatic efforts to engage with New Delhi on pandemic cooperation.

On April 28, Chinese Foreign Minister Wang Yi hosted a video conference with his counterparts from Afghanistan, Pakistan, Nepal, Sri Lanka and Bangladesh, offered to help the South Asian countries get greater access to Covid-19 vaccines. According to Sun, the Chinese side also invited India to the conference, but no one from the country attended.

“This meeting was initiated mainly to help India, considering its surging number of cases,” said Lin Minwang, deputy director of the Center for South Asian Studies at Fudan University in Shanghai. “As far as I know, the Chinese side had sent the invitation twice without any response.”

As of Monday, India has reported more than 22 million cases and 246,000 deaths, according to Johns Hopkins University statistics.

Ma Jiali, director of the Center for Strategic Studies at China Reform Forum in Beijing, told Caixin that said that offering India a hand during the crisis could improve Sino-Indian relations to some extent following the border skirmish and geopolitical tensions. However, Lin did not expect that China’s support would do much to sway New Delhi. “Modi chooses the U.S. side in 2014 and will not let his efforts be vain by accepting China’s help this time,” he added.

Initially, Washington had been criticized for slow response to aid India over the pandemic while prioritizing domestic use of vaccines and medical supplies.

On April 16, Adar Poonawalla, CEO of the India-based Serum Institute, urged U.S. President Joe Biden to lift the ban on exporting vaccine raw materials that is hampering the institute’s ability to ramp up production. The institute is the world’s biggest vaccine-maker and also a major producer of the Oxford/AstraZeneca vaccine.

To meet growing calls in India to provide supplies and a backlash at home, Biden and his administration pledged on April 25 to provide vaccine raw materials and financing to boost the production of shots.

Shortly after U.S. National Security Advisor Jake Sullivan and his Indian counterpart Ajit Doval’s phone call that day, the White House announced that vaccine raw materials would immediately be made available, and the U.S. would fund an expansion of production capacity for Indian vaccine-maker BioE. The announcement also promised that ventilators, therapeutics, rapid-test kits, and protective medical gear would be sent as well.

U.S. Chargé D’Affaires in India Daniel B. Smith said Wednesday that the raw materials for producing 20 million doses of the AstraZeneca vaccine will arrive in India this week.

There were also questions about the U.S. stockpile of AstraZeneca shots. Biden’s chief medical adviser Anthony Fauci and other doctors called for the shots to be sent to countries in need like India. After initially hesitating, the U.S. is planning to share 60 million doses of the AstraZeneca vaccine. India was lobbying to get more than 35% of the shots, according to an Indian official quoted by Reuters.

Aparna Pande, director of the Initiative on the Future of India and South Asia at the Washington-based Hudson Institute, told Caixin that the U.S.’ response may have been slow, but it made up for that by the sheer amount of aid and assistance, and support a limited waiver for Covid-19 vaccines at the WTO.

“The India-U.S. relationship is strong and the U.S. support only reaffirms that,” Pande said. “There is a global geopolitical competition between the U.S. and China and both countries would like India to be on its side. India is aligned to the United States and will remain so because of basic geopolitics.”