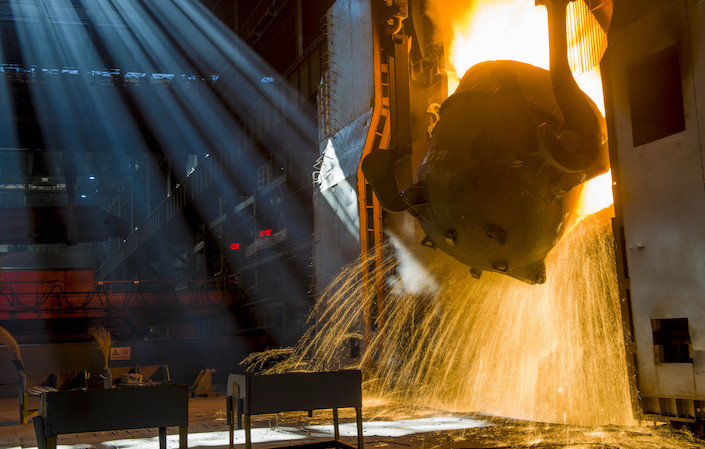 Major Chinese steelmakers reported a combined profit of $35.1 billion for the first half this year, up 220% from a year earlier.

Major Chinese steelmakers recorded a sharp rebound in profits for the first half this year with combined profit of 226.8 billion yuan ($35.1 billion), up 220% from a year earlier, according to the China Iron and Steel Association. Combined revenues reached 3.46 trillion yuan, 51.5% higher than a year ago. Steel prices are expected to stabilize after volatility in May and narrow-range fluctuation in June and July. However, the soaring costs of iron ore and other raw materials are expected to squeeze gross profit margins. China’s crude steel production during the first six months reached 563 million tons, up 11.8% from a year ago.

Ding Liguo, executive chairman and chief executive of China’s Delong Holdings, said the company may be involved in the development of iron mining in the Simandou range of hills in West Africa’s Guinea as iron ore prices soar. Delong Holdings and its subsidiary New Tianjin Steel performed well in the first half. Ding said the greatest achievement was the completion of mixed ownership restructuring of New Tianjin Steel. Simandou is considered to have the world’s largest, highest-quality iron ore deposits, with some experts forecasting that annual production could hit 150 million tons.

China’s central bank urged financial institutions to implement policy tools to cut carbon emissions and pledged it will provide eligible lenders with low-cost funds and encourage them to offer financing at preferential interest rates for projects with significant effects on carbon emission reductions.

Li Auto Inc. and Xpeng Inc., two Chinese electric vehicle startups, set monthly delivery records in July in the face of fears that the semiconductor shortage may have spilled into the third quarter. Li Auto delivered 8,589 units of the Li ONE in July, the first time sales topped 8,000 in a single month, up 251.3% from a year earlier and 11.4% from June. XPeng reported deliveries of 8,040 vehicles in July, a 228% year-on-year jump and up from 6,565 deliveries in June. July sales included 6,054 P7s and 1,986 G3s.

The National Development and Reform Commission in a briefing on first-half economic performance called for efforts to keep the economy operating within a reasonable range and tap the potential of the domestic market. The commission also urged strengthened innovation, coordination of development between urban and rural areas, solid steps toward carbon neutrality, deepening of reform and opening-up, further strengthening of food security and improvement of people’s livelihoods.