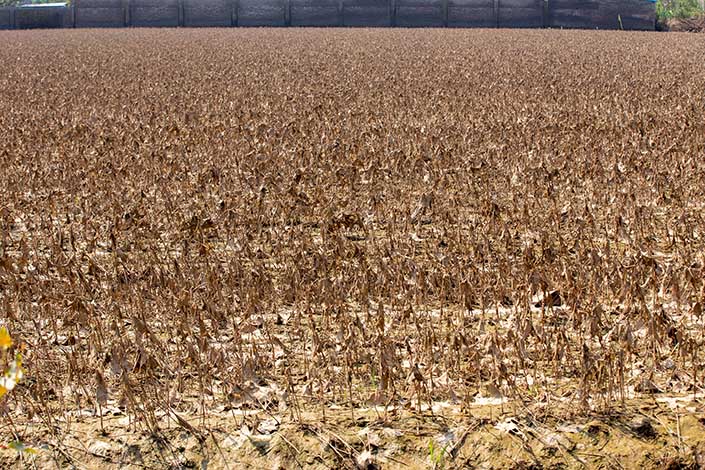 Crops have been detroyed by the flood in Jiaozuo, Central China’s Henan province, on Friday. Photo: VCG

The deadly floods that devastated swathes of Central China’s Henan province last month are expected to cost insurers billions of yuan, sounding a warning for the costs of climate change, according to industry insiders and analysts.

The official death toll (link in Chinese) had reached 302 on Monday, and estimates of immediate economic losses had grown past 114 billion yuan ($17.6 billion). The provincial capital, Zhengzhou, has been the hardest hit by far, while flooding and heavy rain has also severely affected other cities, including Xinxiang, Hebi and Kaifeng.

Insurance payouts related to the disaster are expected to exceed 8 billion yuan, or about 0.7% of China’s total non-life direct premiums in 2020, analysts at global ratings giant Fitch Ratings Inc. wrote in a report. An actuary at a large property insurance company projected a higher number at more than 10 billion yuan.

Insurers in Henan had received 412,300 claims worth about an estimated 9.8 billion yuan in total as of July 28, Ma Chao, a deputy head of the national insurance regulator’s Henan branch, said at a briefing (link in Chinese).

About two-thirds of that 9.8 billion yuan figure comes from auto insurance claims, Ma said. In part that’s due to a regulation (link in Chinese) that came into effect in September last year that directed insurers to include flood damage in their vehicle damage policies.

Views vary on how severe the impact of the flooding will be on insurers’ bottom lines. Fitch said the hit to the insurance industry will be “material” as claims continue to surge.

But an industry insider told Caixin that the claims would be easily absorbed by the vast industry. Last year, the total payout of China’s property insurance industry reached 695.5 billion yuan, according to the insurance regulator (link in Chinese).

The Henan government has allocated 8.3 billion yuan in relief funds and provisions with the help from the central government and public donations, Wu Guoding, a deputy provincial governor, said at a Monday briefing (link in Chinese).