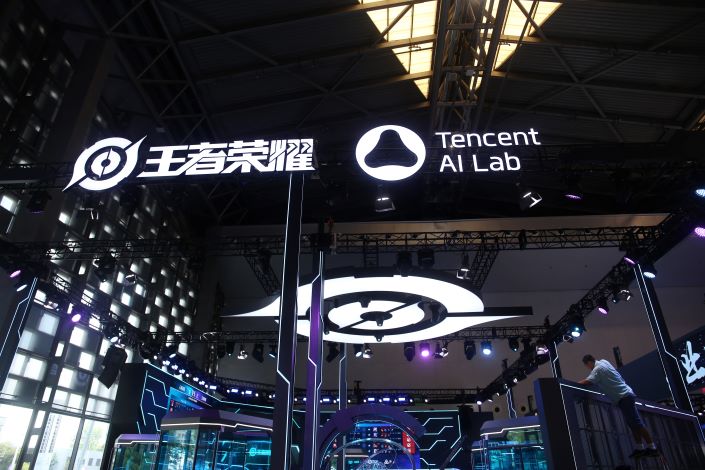 The stock of Tencent Holdings Ltd. fell by as much as 10.8% in Hong Kong on Tuesday. Photo: VCG

The scare came as jittery investors contend with Chinese government crackdowns on sectors ranging from ride-hailing to education, which have roiled markets and erased hundreds of billions of dollars from company valuations.

The article in the Economic Information Daily, a newspaper affiliated with the official Xinhua News Agency, said gaming addiction was harming children’s academic and personal development, adding that the condition was “commonly referred to as ‘spiritual opium’ and ‘electronic drugs.’” It was later taken offline, but was subsequently restored (link in Chinese) without those terms.

The piece cited a government report (link in Chinese) published last month that found 13.2% of child mobile gamers in China play for an average of more than two hours per day, a rise of 0.7% since 2019.

The article singles out Tencent’s market-leading title “Honor of Kings,” describing it as “the most popular online game among students” and citing an unnamed survey respondent who said some of their classmates played it for up to eight hours per day.

Hours after the original piece was published, Tencent said (link in Chinese) that it will reduce the amount of time that minors can spend playing “Honor of Kings” from one and a half hours to one hour during non-holidays and from three hours to two hours during holidays, adding that it will also ban children under 12 from making in-game purchases.

The internet giant also said it may later extend the rules to its other games and called for an industrywide debate on whether to completely prohibit children under 12 from playing online games. It did not mention the commentary in its statement.

Neither NetEase nor Bilibili have commented publicly on the opinion piece or the stock price volatility. None of the three above companies responded to Caixin’s requests for comment.

But analysts have said investors are shying away from the sector amid China’s sweeping crackdown on the country’s technology firms. “Investors are concerned that other sectors could be affected by the government’s social policy, and gaming addiction is a potential target,” wrote Chelsey Tam, a senior equity analyst at Morningstar, in a note last week.

Dramatic policy shifts by Beijing in recent weeks have pummeled the share prices of firms in fields ranging from e-commerce to edtech. Tencent shed $170 billion of its market value in July, more than any other firm in the world, according to figures from Bloomberg.

China has previously sought to control excessive internet use among young people by restricting their ability to purchase items in online games, requiring companies to make users register with their real names and identities, and limiting how much time children are allowed to spend playing games. In June, Beijing rolled a new child protection law that bars companies from offering addictive online products and services to minors.

Real-name registration has already met its basic targets in combatting internet addiction, but the country will treat the issue “with the utmost importance” to ensure “positive results,” Yang Fang, a vice director of the publishing bureau at the Communist Party’s publicity department, said last week.