By Jia Tianqiong and Matthew Walsh 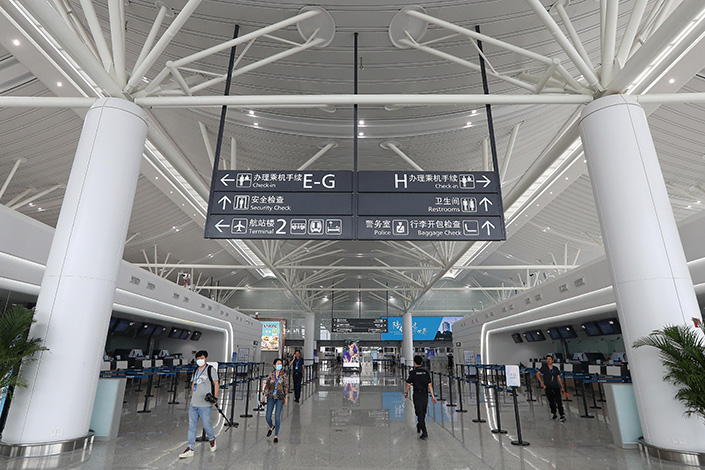 Airline and airport staff exposed to international travelers, imported goods or flight equipment will be required to undergo daily nucleic acid tests, and those who work alongside such staff need to take two tests per week no less than two days apart, the administration said in a notice (link in Chinese) published on Tuesday.

Airlines must also reserve the back three rows of aircraft seats as emergency isolation zones, strip back in-flight services in areas of the country with high numbers of cases, clean and sterilize aircraft facilities more frequently and reduce access to the cockpit, the notice said.

The move comes after the eastern city of Nanjing tightened travel restrictions and launched mass testing in response to a cluster of more than 200 locally transmitted infections since July 20, many of which involve the fast-spreading delta variant.

Nearly half of the new cases are people who work at Nanjing Lukou International Airport, while most of the rest are their close contacts, the administration revealed at a press conference Tuesday. Only eight of the infected were airline passengers.

The airport’s failure to control infections among frontline staff caused the outbreak to spread to other cities and provinces, the administration said. Multiple cities, including the capital Beijing, have strengthened disease control measures after discovering new cases.

The main causes of the Nanjing airport cluster were a long-term lack of awareness of the seriousness and complexity of disease control, lax daily management and the inadequate application of local rules and requirements on flight operations, the administration said.

In a separate notice (link in Chinese) published the same day, the body also ordered all airports to carry out special training sessions on disease control work by the middle of August.

Authorities have moved to firm up disease control work among airport ground staff and prevent them from mixing with cabin crews after small outbreaks earlier this year were traced to employees at airports in the major cities of Shanghai and Shenzhen.

China has restricted passenger flights into the country in an effort to prevent new outbreaks. The nation currently runs around 230 international flights per week, equivalent to just 2% of the average number in 2019, before the pandemic took hold, the administration said.

However, the number of international shipping flights has increased by some 258% over the same period to 3,700 per week, it said.

Chinese health officials said last week that the Nanjing outbreak originated from a passenger flight entering the airport from Russia, where Covid-19 infections have surged since the start of June. Feng Jun, the airport’s chairman and Communist Party secretary, was suspended from his duties on July 23.

China confirmed (link in Chinese) 71 new locally transmitted cases of Covid-19 on Wednesday, 10 more than the previous day, according to the National Health Commission. Thirty-five of the infections were reported in Jiangsu, where Nanjing is the capital.

A further 15 infections occurred in the central province of Hunan, where concerns are running high after hundreds of people in the tourism hub of Zhangjiajie were exposed to the virus during a theater performance. Zhangjiajie added three new cases on Wednesday, Hunan’s provincial health commission said (link in Chinese), without giving further details.