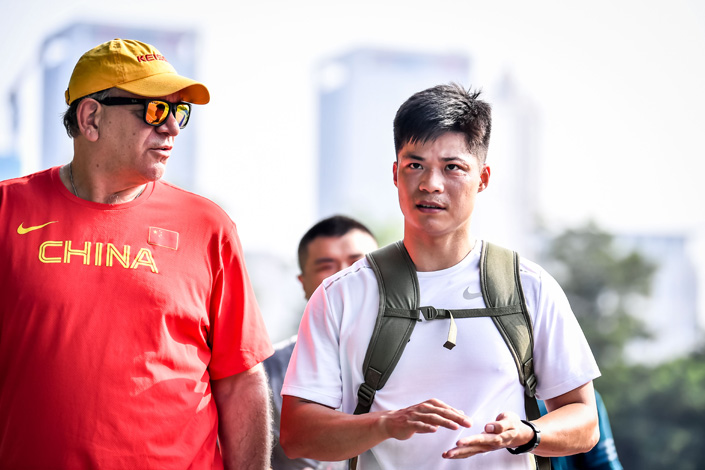 From rowing and fencing to track and field, Chinese athletes have stood tall in traditionally Western-dominated events at the 2020 Tokyo Olympics, breaking records and propelling the nation to sit atop the overall medal tally so far.

While China has long dominated sports such as diving, gymnastics and table tennis, breakthroughs in many of these new sports share a similar trait which competitors are now acknowledging played a significant role in their success: foreign coaches.

Just some of the standout achievements included the Chinese men’s double sculls rowing team, who on July 28 won the bronze medal, the first time the nation had made it to the podium in that event, challenging the dominance of Western rowers.

Meanwhile, sprinter Su Bingtian set a new Asian record of 9.83 seconds in the 100-meter semifinal and although he didn’t win a medal, he became the first Chinese athlete in history to run in a final, considered among the most prestigious events in athletics.

These successes have drawn attention to the team of foreign coaches who have built close ties with Chinese athletes and through great effort and commitment have helped them realize their Olympic dreams and be competitive against international rivals.

In Tokyo, some 30 foreign coaches (link in Chinese) — the most since the 2008 Beijing Olympics — from 19 countries are helping the Chinese delegation in 17 Olympic events such as track and field, water polo and rugby. The Asian sporting behemoth has taken the lead in the gold medal tally, with 32 won so far.

“The Olympics are an open arena,” Huang Yaling, a professor at the Beijing Sport University told the Central Commission for Discipline Inspection and the National Supervisory Commission last month. Huang said that the inclusion of foreign coaches can help China make up for technical shortcomings in some events, while promoting mutual exchanges in the spirit of sport and facilitating high-level and fair competition.

Among the 30 are Steve Redgrave, a retired British rower who won five gold medals across five Olympics and who has coached the Chinese rowing team since 2018, and Su’s American trainer Randy Huntington.

Redgrave is just one of the foreigners training the Chinese rowing team, with the coaching team implementing a rigorous regime that required athletes to complete 30-kilometer rows every day, Caixin has previously reported.

According to a 2019 paper (link in Chinese) written by Su, who is also an associate professor at the Guangzhou-based Jinan University, hiring foreign coaches was a significant factor contributing to the progress of Chinese sprinters. He cited Huntington and Rana Reider, both of whom are from the U.S., which is widely recognized as having the world’s largest scientific training system.

Using the “champion model,” the two coaches conducted all-round monitoring of athletes’ physical fitness and recovery from injuries, the paper said. In doing so, the coaches identified the athletes’ shortcomings and then formulated tailor-made training plans to improve their overall competitiveness.

The paper highlighted the positive impact of enlisting more top foreign coaches as proposed by sports authorities after the 2008 Beijing Olympics. They also called for strengthening support for scientific research and improved training facilities.

The principle has worked well in other sports such as fencing.

When Sun Yiwen won the women’s individual epee fencing gold medal on July 24, her French coach Hugues Obry hoisted her up to his shoulder in celebration, a moment that has since become one of the most memorable of the Tokyo Olympics among sports fans all over the world.

Obry, an Olympic gold medalist himself, joined China’s coaching team five years ago with the task of reviving the epee team that left the 2016 Rio Games without any golds, the official China Daily newspaper reported. He then picked a new generation of talent including Sun and helped improve the training quality and intensity, the report said. Sun became the first fencer in China to win the gold medal since the London Games in 2012.