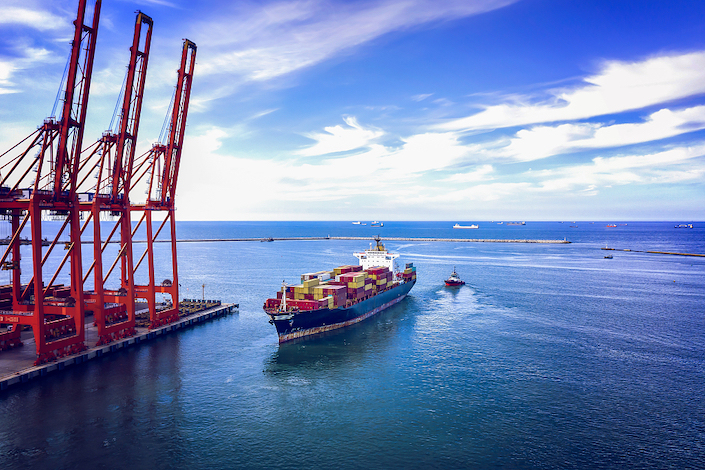 Container shipping rates from China and Southeast Asia to the U.S. exceeded $20,000 per twenty-foot equivalent unit, according to state broadcaster CCTV, citing the global container freight index. The surge in shipping rates was driven by multiple factors including changes in the calculation method, increasing surcharge fees by major global shipping companies such as Maersk and Mediterranean Shipping, and expansion of China-U.S. trade. China’s trade with the U.S. reached 2.62 trillion yuan ($405 billion) in the first seven months, up 28.9% from a year earlier.

Even as trading on China’s national carbon market dwindled away in its first month, one sign of life emerged this week in the form of an unusual cross-border deal for a voluntary form of carbon emission credits. On Aug. 9, an institution and an individual from Hong Kong bought nearly 10,000 tons of China Certified Emission Reductions (CCERs) from an Elion Group solar power project in the Kubuqi Desert, the first cross-border transaction involving CCERs. High-quality CCER trading is critical to the future of China’s carbon market and the transition to zero carbon for society as a whole, the institutional buyer said.

China’s total electricity consumption in July reached 775.8 billion kilowatt-hours (kWh), 12.8% higher than a year ago, bringing the January-July usage increase to 15.6%. The data reflects stable economic recovery and strong demand from households amid extremely hot weather, according to the National Energy Administration. Power consumption by the agricultural sector rose 20% in July to 10.2 billion kWh, while that of the industrial sector grew 9.3% and the service sector, 21.6%. Electricity consumption by residential customers totaled 116.6 billion kWh, up 18.3% year-on-year.

The board of Contemporary Amperex Technology Co. Ltd. (CATL) approved a plan to sell as much as 58.2 billion yuan ($8.9 billion) of shares to expand the battery manufacturing giant’s production amid intensifying competition. Ningde, Fujian-based CATL, the world’s biggest maker of electric-vehicle batteries, will sell the China-listed shares to as many as 35 investors, according to an exchange filing late Thursday. Proceeds will be used for lithium-ion battery projects and new-energy research and to replenish liquidity. Shares in CATL rose as much as 5.6% Friday.

Shanghai-listed Xinjiang Xintai Natural Gas Co. Ltd. (603393.SH) expects to post a net profit of 760 million yuan to 800 million yuan ($117.3 million to $123.5 million) for the first half, a year-on-year increase of 335%–358%, the company said. However, most of the period’s increase reflected one-time gains. The company signed agreements last October with PetroChina Kunlun, a subsidiary of Kunlun Energy, to sell stakes of 49%–51% in 10 affiliates for around 680 million yuan.

Chengdu Gas Group Co. Ltd. (603053.SH) reported net profit of 320 million yuan ($49.4 million) in the first half, a year-on-year increase of 26.92%, reversing a downward trend of the past two years. The company’s operating revenue totaled 2.33 billion yuan during the period, 14.14% higher than a year earlier, mainly due to an increase in sales of natural gas.

Yunnan Luoping Zinc & Electricity Co. Ltd. (002114.SZ) posted a net profit of 33.13 million yuan ($5.12 million) in the first half, reversing a net loss of 152 million yuan a year earlier. Revenue rose 88.5% to 994 million yuan. Higher zinc prices during the period spurred higher production, resulting in an increase in profit margin. As of the end of June, prices of zinc were up 3.94% from the beginning of the year.

With a sustained increase in coal production and easing demand as the summer usage peak comes to an end, current coal market supply and demand are generally in balance, according to the National Development and Reform Commission. China’s power plants consumed 7.2 million tons of coal on Aug.10, 300,000 tons less than in the peak level, while coal supplies for power generations increased to 7.4 million tons, hitting a record high for summer coal supply.