Editorial: To Tackle Climate Change, Institutional Mechanisms Must Be Rationalized 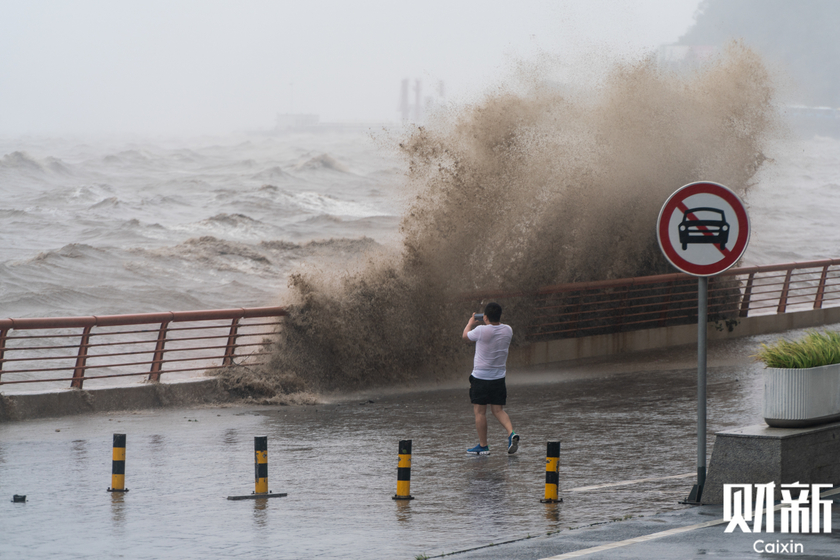 A man takes photos of the stormy waters in Zhoushan, East China’s Zhejiang province, during a typhoon on July 25. Photo: Liang Yingfei/Caixin

On July 30, a meeting of the Political Bureau of the Communist Party of China’s (CPC) Central Committee called for comprehensive, well-organized measures to achieve peak carbon dioxide emissions and carbon neutrality, and for the formulation, as soon as possible, of an action plan to ensure China’s carbon dioxide emissions peak before 2030. Most notably, the meeting proposed that efforts must be made to develop China-wide plans and correct a tendency for “campaign-style carbon emission reduction” by establishing innovative mechanisms and tradition-breaking, resolutely curbing haphazard development of projects responsible for high levels of pollution and energy consumption. A few days ago, the U.N.’s Intergovernmental Panel on Climate Change (IPCC) released the first part of its Sixth Assessment Report, called “Climate Change 2021: The Physical Science Basis,” estimating that without rapid, large-scale reductions in greenhouse gas emissions, limiting warming to 1.5 C or even 2 C in the 21st century would be impossible. The great concern this triggered in both China and the international community indicates that climate change has been recognized as a serious global challenge. China needs to find a reasonable path for dealing with climate change. China’s need for rationalized institutional mechanisms that make carbon emission reduction the conscious choice of all organizations, industries and even the public, is greater still.

As the world’s largest carbon emissions producer, China’s emission reductions will have a global impact. In September 2020, President Xi Jinping announced China’s commitment to achieving “peak carbon dioxide emissions” by 2030 and “carbon neutrality” by 2060 at the U.N. General Assembly. Since then, China has intensified its formulation of a timetable and roadmap for these two goals. Events indicate that while the path for achieving carbon emission reduction is under exploration, rationalization of institutional mechanisms remains incomplete.

The central government was correct to propose a path of “establishing innovative mechanisms and tradition-breaking.” This path is considered reliable, practicable, and capable of evading problems associated with “campaign-style carbon emission reduction” and “electricity shortages.” The pressing need for carbon emission reduction demands orderly action that breaks with conventional practice while establishing innovative mechanisms. Without the latter, even with a break from conventional practices, a rebound in carbon emissions, or even economic and social shocks, could easily occur. “Campaign-style carbon emission reduction” will certainly lead to a rebound in projects, in turn causing high pollution and energy consumption. But if the Chinese provinces most heavily dependent on consumption of fossil fuels impose excessively radical transformation measures, the short term economic and social costs would be huge. This creates a difficult challenge.

Carbon emission reduction also needs sound institutional mechanisms to act as a guarantee. Thus it is these institutional mechanisms that will determine whether the path can be effective. It is widely acknowledged that China relies heavily on top-down administrative power to drive carbon emission reduction in industries, enterprises, etc. The method of layer-by-layer supervision and decomposition of indicators adopted by China’s current governance system seems effective, but remains liable to cause many side effects. It lacks precision, and tends to go astray as an authoritative requirement for carbon emission reduction. Mandatory emission reductions are often “one size fits all” and difficult to sustain. Since the central government advanced the two carbon goals last year, some regions have taken radical approaches, shutting down high-carbon projects and reducing excessive coal-fired power generation capacity. And some companies have made hasty investments in green and low-carbon areas, such as hydrogen energy. If we do not rationalize the relevant institutional mechanisms, the basis for such extreme behavior will remain.

Rationalizing institutional mechanisms for carbon emission reduction will be an extremely complicated task, the most effective solution for which will involve the setting of appropriate prices for energy-related products and services. This basic experience has been gained during China’s economic and social development over the past 40 years of reform and opening up. An inaccurate or insensitive “price baton” would certainly affect the implementation of carbon emission reduction strategies. China can and should use market mechanisms, such as price, to guide market players’ rapid, orderly and conscientious reduction of carbon emissions, to achieve “survival of the fittest” among enterprises and optimal allocation of resources. In this regard, electricity prices are particularly important. The power generation industry is China’ largest source of carbon emissions, but the establishment of electricity markets is lagging, resulting in problems such as excessively high coal prices relative to electricity prices, and stunted renewable energy development. We should therefore further deepen reform of the power system, promote further opening of the power generation industry, correct distorted price signals and establish a reasonable transmission mechanism. These efforts will enable electricity spot market prices to be transmitted to the user side in the form of time-of-use tariffs, guiding users’ peak-load shifting, and promoting gradual establishment of a new energy-dominated power system.

Carbon emissions and pollution create externalities. Some people consider these externalities a typical manifestation of market failure, mistakenly concluding from this that market economies are inherently ill-equipped to deal with climate change. In fact, while such externalities do require government oversight, markets can play a decisive role in the allocation of resources, including the production and consumption associated with carbon emissions. And modern market economies are developing tools to internalize these externalities, such as carbon markets. Although domestic and overseas attempts have yet to produce remarkable results, they are on the right track.

Technological innovation will be the fundamental solution permitting green, low-carbon development, and this is inseparable from the guarantees provided by institutional mechanisms. At present, the electric vehicle industry is ascendant, with a variety of new energy, energy storage and other technologies offering excellent investment and development prospects. However, to achieve further development, the incentive and guiding role of market mechanisms, such as prices, must be given full play; otherwise, breakthroughs in key technologies such as carbon capture, batteries and hydrogen energy utilization may not be possible.

To address climate change, public climate awareness, leading to changes in behavior, must also be enhanced. Most scientists accept the causal relationship between climate change and human activity going back to the Industrial Revolution, but some have their doubts and even label climate change a “conspiracy theory.” Regardless, we have only one planet Earth, and carbon emission reduction can only be conducive to its sustainable development. In many European countries, environmental awareness has already deepened, with carbon emission reduction becoming a conscious choice in people’s daily lives. Other countries should learn from this.

The recent frequency of extreme weather, while its relationship with climate change remains controversial, at least provides a constant warning of the great importance of the environment. And climate change provides one of a few areas over which major countries, otherwise at odds, are willing to cooperate, with major economies working to reduce emissions for the 26th United Nations Climate Change Conference set to be held in Glasgow in the U.K. this November. Thus rationalizing the relevant institutional mechanisms, especially those for setting appropriate prices, can provide both a foundation stone for global best practices, and a “point of consensus” around which multiple parties can engage in dialogue.