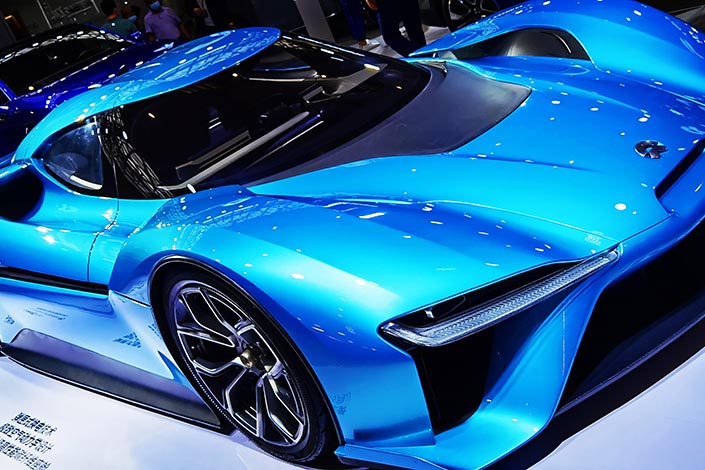 A Nio car at a Chongqing auto show on June 16. Photo: VCG

Chinese electric-vehicle startup Nio said it had not tampered with evidence needed for an ongoing investigation into a crash that killed a young entrepreneur who had been driving one of the firm’s cars with its self-driving system activated.

An obituary published Saturday on a public WeChat account called “Meiyihao” said Lin Wenqin, the entrepreneur who ran several businesses including a restaurant chain, died in the crash on a highway in Southeast China’s Fujian province on Aug. 12 while driving his Nio ES8 SUV. The obituary said that the car’s automated driving function, or Navigate on Pilot (NOP), was turned on when the incident happened. Lin was 31 years old.

The death of the young businessman once again raised public concerns over the safety of advanced driver assistance systems and pushed the price of Nio’s U.S.-listed stock down by 5.87% to close at $38.62 on Monday.

In a statement released late Monday, the Shanghai-based automaker said that it “did not delete or modify any data” stored in Lin’s car after the crash, in a response to media reports that quoted a Beijing-based lawyer representing the deceased’s family as saying that a Nio technician had been subpoenaed after accessing the car without their approval.

“In the afternoon of Aug. 13, Nio’s technical staff conducted the first vehicle data extraction (after the traffic accident) in front of Lin’s relatives and police,” Nio said, adding that it will cooperate with the police investigation and provide all the materials needed.

The company also said that it will not release any information about the crash until the investigation results are published. According to its statement, Lin died after his car collided with an engineering vehicle on the highway.

A friend of Lin told Caixin that the car was traveling at a speed of 110 kph (68 mph) when the crash happened, and that there were no tire marks at the scene that indicated braking.

In October 2020, Nio released the NOP feature, which it said combines the functions of navigation, high-definition mapping and Nio Pilot, an advanced driver assistance system that is similar to Tesla’s Autopilot and Xpeng’s Xpilot. The company said that NOP can guide a vehicle to follow the navigation routes in certain situations, like helping the car choose the optimal lane at high speeds.

The firm has also laid out the limitations of the technology. In an article published on the company’s website on the eve of the NOP launch, Zhang Jianyong, associate vice president of autonomous driving at Nio, strongly reminded Nio owners of the differences between NOP and true self-driving systems, saying NOP is unable to react to moving objects and traffic lights and cannot be used in bad weather and complex road conditions.

“NOP remains a driver assistance function that may stop working when certain conditions are not met. When using the function, drivers must pay constant attention to the changes of traffic conditions,” Zhang wrote.

A Nio owner who works as an engineer told Caixin that he is always cautious about using the NOP function on highways, especially when vehicles are moving close to his car.

On Monday, Li Xiang, founder and CEO of Li Auto, a Nio rival, called on social media for the unified use of Chinese translation for the different levels of autonomous driving in order to protect consumers from misleading ads about the technology.

U.S. engineering standards group SAE International classifies autonomous driving from Level 0 to Level 5, with Level 1 and Level 2 considered driver assistance technology that requires a human to be in control of the vehicle the whole time. Level 4 and Level 5 are deemed advanced automated driving technology that allows a car to drive itself almost independently of human intervention in some or all conditions. Level 3 refers to features that enable a car to drive itself only under certain circumstances and requires the driver to be ready to take control in the event of an emergency.

The fatal crash came three weeks after Nio began shipping the first batch of its flagship ES8 SUVs from Shanghai to Norway in its first attempt to carve out territory in markets outside China, where it has maintained high sales growth for several quarters.

In the second quarter of this year, Nio said that it delivered 21,896 vehicles, more than double the number in the same period of last year.

Nio is among several automakers that have been troubled by crashes associated with their driver assistance systems. On Monday, the U.S. National Highway Traffic Safety Administration launched a formal probe into Tesla’s Autopilot after a series of crashes in which a Tesla car whose Autopilot was on struck one or more vehicles in an emergency-response situation, according to the Wall Street Journal.