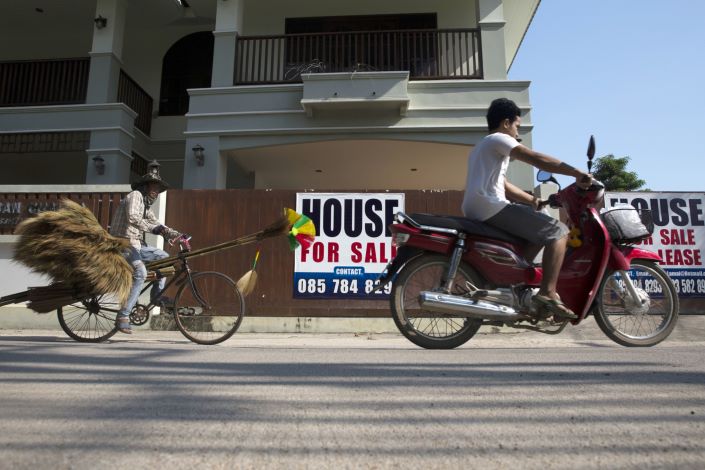 A motorcyclist and a cyclist ride past 'House For Sale' signs in Koh Samui, Surat Thani province, Thailand, on Jan. 18, 2018. Photo: Bloomberg

(Bloomberg) — Dohome PCL may not qualify as a “unicorn,” but the home-improvement retailer does possess some rare traits that have made founder Adisak Tangmitrphracha a new member of Thailand’s billionaire club.

Established in Ubon Ratchathani, a rice-growing province about 600 kilometers (375 miles) from Bangkok, Dohome is one of only two Thai exchange-listed companies with a market value of more than $1 billion that started in the rural northeast Isaan region.

Dohome is also among a handful of Thai firms whose shares have at least doubled this year amid the backdrop of a pandemic, boosting Adisak and his family’s fortune to $1.3 billion, according to the Bloomberg Billionaires Index. The stock gained as much as 2% in Bangkok on Monday.

Adisak, 68, opened his first shop in Ubon Ratchathani in 1983, selling tools and construction materials mainly to local farmers and small contractors. It wasn’t until 2007 that he set up the first Dohome megastore outside his home province, having gradually gained confidence and the resources to take on home-improvement stores owned by larger rivals like Siam Cement PCL — Thailand’s first conglomerate — and Central Retail Corp. PCL, controlled by Asia’s 20th-richest dynasty.

“Dohome has set a great example for small businesses to compete with much larger and better-funded companies from the metropolis,” said Mongkol Julthus, chairman of the Ubon Ratchathani Chamber of Commerce. “An aggressive pricing strategy and good customer services have helped the company attract loyal clients from many provinces.”

The company operates 14 full-service stores nationwide, with a plan to increase outlets to 36 by end of 2025, according to its website. With the onset of the pandemic, the company boosted its online presence and marketing as government restrictions forced the shuttering of several stores in the country’s worst afflicted areas.

Adisak, who declined requests to be interviewed for this story, remains active in the Ubon Ratchathani Chamber of Commerce, advising would-be entrepreneurs and funding social activities, said Mongkol. The trained engineer — his degree is from nearby Khon Kaen University — is often spotted jogging at the province’s main public park.

Dohome earlier this month reported net income of 601 million baht ($18 million) in the second quarter, a 311% increase from the same period last year and a quarterly record since its listing in 2019. For the six months through June, profit climbed 253% to 1.14 billion baht.

“The work-from-home policy is spurring demand for home renovation and decorations in some areas,” said Amnart Ngosawang, an analyst at KTBST Securities Pcl in Bangkok. “We expect Dohome to maintain steady earnings growth in the long term through its expansion strategy and effective product mix.”

The retailer plans to increase the number of its own products at the stores to boost profit margins, according to a presentation to analysts last week. Sales of those products are expected to make up 20% of total revenue in 2022, from 16% in this year’s second quarter, it said.

Contractor Somsak Thongthaemkaew, an independent businessman, has been a regular Dohome customer for five years, often stopping by several times a week to buy products from wiring to tools and marble to bricks.

“Most of my friends and competitors go to Dohome because they have a bigger selection than small shops,” Somsak said, while shopping in an outlet about an hour’s drive from Bangkok. “For homeowners doing self-repairs, the reasonable prices are a big draw, especially in these hard times.”