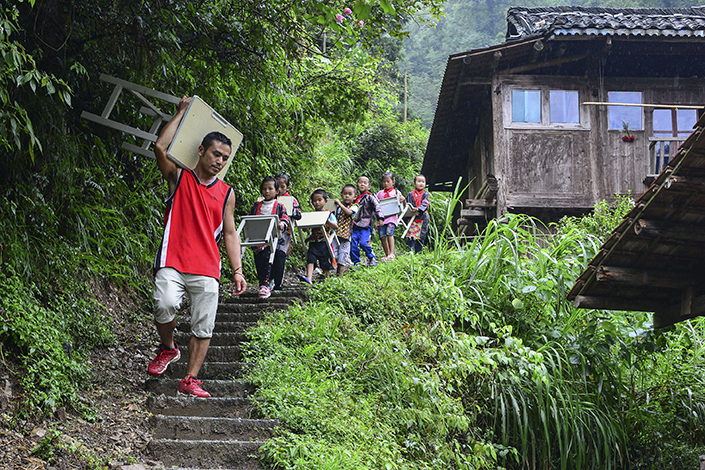 A teacher and his students at an elementary school in Southwest China’s Guizhou province carry new desks that they received from corporate donors. Photo: VCG

The tertiary distribution, a slightly unfamiliar phrase, has quickly become a question of public concern. On Aug. 17, the 10th meeting of the Central Financial and Economic Affairs Commission was presided over by General Secretary Xi Jinping to focus on the issues concerning common prosperity. During the meeting, it was pointed out that “a basic institutional arrangement that coordinates the primary distribution, redistribution and tertiary distribution” should be built. The tertiary distribution is closely related to the advocacy that “encourages high-income individuals and enterprises to give more back to society,” which has become a hot topic in recent days.

The so-called “tertiary distribution” generally refers to the poverty alleviation activities carried out by social forces through donations, charities and volunteering. Since the reform and opening-up, people’s incomes have risen significantly, their living standards have continuously improved, and a moderately prosperous society has been built in all respects in China. Thus, it can be said that the task of eradicating absolute poverty has been completed. However, there is still a prominent problem affecting sustainable development, that is, the widening income gap between different classes and the stubbornly high Gini coefficient caused by complex economic and social reasons. To address this issue, we need to “expand the proportion of middle-income groups, increase the income of low-income groups, make appropriate adjustments to high incomes, and confiscate illegal incomes, so as to form an olive-shaped distribution structure, which is larger in the middle and smaller at both ends.” It should be admitted that the tertiary distribution is only a supplement to the primary distribution and redistribution, and there is a phenomenon of diminishing utility between the three distributions. Even so, the tertiary distribution deserves great attention given that it plays a special role in establishing a positive and good view of wealth and shaping an equal and harmonious social psychology.

China’s economic and social development has indeed come to a point where tertiary distribution plays a role. In 2019, the Fourth Plenary Session of the 19th CPC Central Committee made a proposal to “give full play to the role of the tertiary distribution and develop charities and other public welfare undertakings” for the first time. Also, it pointed out the importance of tertiary distribution, developing charity, and improving the pattern of income and wealth distribution in the “14th Five-Year Plan.” There is both demand and supply for the tertiary distribution. In particular, there is great enthusiasm among the people, which is embodied in many vivid examples, such as the Wenchuan earthquake and the recent floods in Henan province. However, a huge gap between China and developed countries exists in terms of total charitable donations, the proportion of GDP that it makes up and per capita donation.

The ideological basis of the tertiary distribution is the value of altruism. Although traditional Chinese culture is not short of the ideas of helping those in distress and aiding those in peril, it will take a long time to develop and modernize them, turn them into social responsibility-oriented goals and moral pursuit for high-income groups, and establish an informal system. With respect to the formal system, it is crucial to have a complete set of incentives and guarantee mechanisms. At present, the institutional and mechanical obstacles restricting the tertiary distribution are serious, policy and institutional dislocations still exist, both internal governance and external supervision of charitable organizations need to be strengthened, and its legal status and rights need to be further clarified.

However, this is not to say that there is nothing the government can do about the tertiary distribution. Because charity and voluntary actions, which need to be regulated and protected by laws and regulations, cannot be separated from the guidance and supervision of the government, instead, the current government should focus on easing the restrictions for them. In addition, building public trust in charity is another priority for the government. Repeated crises of confidence caused by the Red Cross Society have severely undermined public confidence in charity, so the government has the responsibility to clarify the relationship between official, semi-official and civil society organizations.

Also, fully mobilizing the enthusiasm of donors is inseparable from the protection of their rights and interests. Article 80 of the “Charity Law” stipulates that natural persons, legal persons and other organizations who donate property for charitable activities shall enjoy tax preference in accordance with the law; while other laws also have regulations on the deduction of corporate and individual income taxes on donations for public welfare. However, although laws and regulations are generally good, there are still some operation problems in their implementation and there are no obvious incentives or guaranteed effects. What’s more, new taxes are also something worth considering. The permanent development of charity in America is tied to the high inheritance tax rate, making charity a more economically rational choice than paying taxes and now, after much controversy, it is time to decide whether China should introduce a similar inheritance tax system or not.

Common prosperity is not only the essential requirement of socialism, but also the original aspiration of reform and opening-up, thus making it “not the prosperity of a few people or the uniform egalitarianism.” Fundamentally, the income distribution is determined by the economic growth model and is closely related to national governance capabilities such as clean governance. Although the tertiary distribution still has a long way to go to fulfill its responsibilities, we cannot rely on it alone to improve income distribution, and efforts in other areas are still needed in order to effectively improve the current situation.