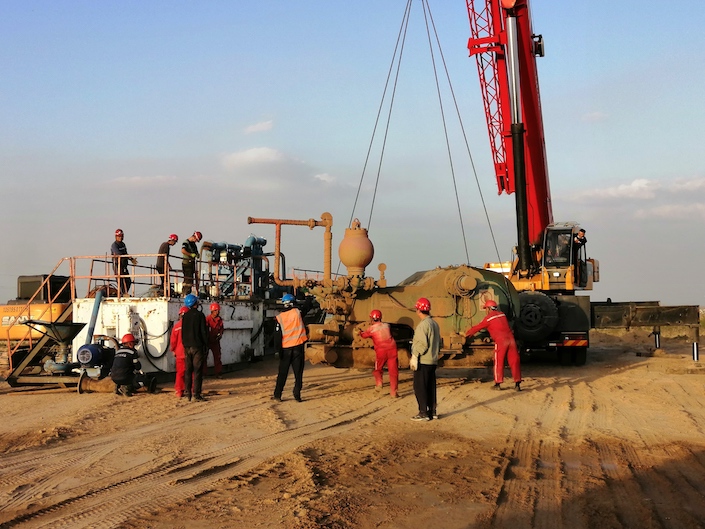 Rescuers trying to reach miners trapped inside the Qingshuiying mine in Ningxia.

Tianqi Lithium Co. Ltd.’s (002466.SZ) lithium hydroxide project in Kwinana, Western Australia, is expected to start first-phase operation by the end of the year and ramp up to full design capacity of 24,000 tons of battery-grade lithium hydroxide by the fourth quarter of 2022, the company said. Tianqi postponed commissioning of the Kwinana hydroxide plant in March 2020, citing liquidity problems amid falling lithium prices and budget overruns at the plant. Lithium prices are up sharply in 2021 on resurgent demand.

Four miners were rescued and rushed to a hospital Sunday night after a roof collapse trapped them inside a mine at around 11:50 p.m. Thursday at the Qingshuiying mine in Northwest China's Ningxia Hui Autonomous Region. The mine belongs to Ningxia Coal of China Energy Investment Corp.

China may cut oil prices for a third time this year in probably the biggest drop since the beginning of the year amid the opening of the domestic refined oil price adjustment window Monday, according to estimates by multiple institutions. Oil prices have retreated as the spread of the delta variant of the coronavirus fueled fears that a new wave of restrictions will hurt demand. Both Brent crude futures and West Texas Intermediate (WTI) crude futures marked their biggest week of losses last week since May, with Brent dropping 8% and WTI about 9%. Oil prices rebounded from a seven-day drop Monday.

Two major Chinese steelmakers, Ansteel and Bengang Group, formally began merging their operations Friday. The merger will promote high-quality development and foster a new paradigm for the steel industry, according to He Wenbo, chairman of the China Iron & Steel Industry Association. China’s steel industry has entered a period of adjustment and upgrade in recent years, with industrial restructuring the major feature. The merger will further optimize resources allocation, create an orderly market competition environment, enhance the ability to cope with risks, and increase the concentration of the current highly fragmented steel industry in Liaoning province, which has a large number of small, less competitive and heavily polluting producers, He said.

China Molybdenum Co. Ltd. (603993.SH) reported 2.4 billion yuan ($369 million) of net profit attributable to equity shareholders in the first half of 2021, up 139 % year-on-year. Revenue jumped 81.5% year-on-year to 84.8 billion yuan, according to the 2021 interim financial report. The company attributed the gains to surging commodity prices.

Experts said they are optimistic about the development of heterojunction technology (HJT) for solar panels and projected that high-capacity and low-cost mass production will be the best option for future expansion. Over the next five years, the penetration rate of HJT technology will grow rapidly from the current less than 1% to more than 70%, said Liu Chang, the founder of Chinese solar media outlet SOLARZOOM.

China's natural gas pipeline network stretched to 110,000 kilometers, of which 46,000 kilometers were been built during the 13th Five-Year Plan, according to the China Natural Gas Development Report 2021 issued Saturday by the National Energy Administration. The national pipeline is basically completed, with the building of four major natural gas import strategic channels completed and connectivity generally realized, according to the report.

China's energy storage industry is experiencing rapid growth thanks to policy stimulus. Since the beginning of the year, the National Development and Reform Commission and the National Energy Administration issued a series of policies to boost development of the industry. Newly installed energy storage capacity surpassed 10 gigawatts (GW) in the first half of the year, up 600% from a year earlier. The number of large-scale projects reached 34, almost 7.5 times higher compared with a year ago. China set a goal of adding more than 30 GW of new-energy storage capacity by 2025, according to guidelines issued July 23.