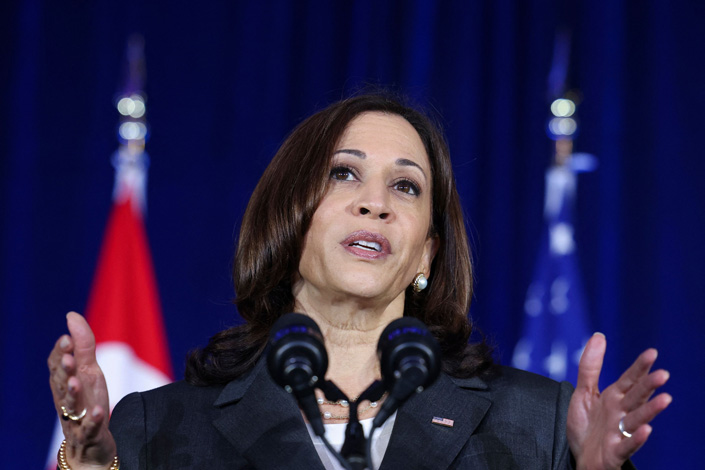 US vice president Kamala Harris delivers a speech at Gardens by the Bay in Singapore before departing for Vietnam on the second leg of her Asia trip on Tuesday. Photo: VCG

U.S. Vice President Kamala Harris’ clarification Tuesday that the U.S. is not pushing countries in Asia to choose between Washington and Beijing is “softened” but “deceptive” rhetoric designed to rally support in a new phase of geopolitical competition with China in the region, an expert warned.

In her speech on the Biden administration’s Indo-Pacific policy on Tuesday in Singapore ― the first stop of the vice president’s weeklong trip to Asia ― Harris accused China of continuing “to coerce, to intimidate and to make claims to the vast majority of the South China Sea.”

Calling Asia a “critically important” region to the U.S. security and prosperity, Harris said Beijing’s actions continue to “undermine the rules-based order and threaten the sovereignty of nations,” adding the U.S. “stands with our allies and partners in the face of these threats.”

However, Harris clarified the United States’ engagement in Southeast Asia and the Indo-Pacific is “not against any one country, nor is it designed to make anyone choose between countries.”

The comment marked the first time the U.S. President Joe Biden’s administration publicly responded to the Southeast Asian leaders’ concern that the U.S.-China rivalry in the region will end up forcing them to pick sides between the world’s two largest economies.

In an interview with the BBC in March, Singapore’s Prime Minister Lee Hsien Loong said that it was impossible for Singapore to choose between the United States and China, given its extensive ties with both superpowers. “I hope the time [to choose] does not come,” Lee said.

“I do not think this is a dilemma only for Singapore,” he said during the interview. “It is a problem for many countries, which is why we are all hoping and encouraging the two large powers to think very carefully that the other one is an adversary which has to be kept down, if not put down.”

Diao Daming, an associate professor specializing in U.S. studies at Renmin University in Beijing, said that Harris tried to “soften and balance” the U.S.’ hardline rhetoric toward China, which reflected “the decline of American influence in Southeast Asia after four years of ‘America First’ policy under the former U.S. President Donald Trump.”

Meanwhile, Harris’ statement is “deceptive” given she was still appealing to the “closest allies and strongest partners” in the region to counter China, Diao said in an interview with Caixin.

He added that after four years of ignoring Southeast Asian countries during the Trump era, Washington’s latest moves could have some results, but they hardly mean “the U.S. is back.”

During Harris’ visit, Singapore and the U.S. signed several agreements to cooperate on issues like cybersecurity, supply chains and climate change.

On Wednesday in Vietnam, Harris called on Vietnamese President Nguyen Xuan Phuc to join the U.S. in “raising the pressure” on China and challenging Beijing’s alleged “bullying and excessive maritime claims” in the South China Sea.

When asked about Harris’ accusation that China is violating “rules-based order,” Chinese foreign ministry spokesman Wang Wenbin hit back Tuesday, saying that the U.S. cannot “wantonly smear, suppress, coerce and bully other countries for the sake of ‘America First’ without paying any price.”

“This is the kind of order that the US wants,” Wang said, “It always tries to defend its selfishness and bullying and hegemonic actions by citing ‘rules’ and ‘order.’ But how many people would actually buy it?”

Stapleton Roy, former U.S. ambassador to China from 1991 to 1995, said last month at a U.S.-China relations event in Beijing that the Biden administration’s early steps toward China seemed to be a continuation of Trump’s hardline policies.

However, Roy noted that this might not sit well with U.S. allies in the region. “A hardline American approach to China does not mesh well with the interests of U.S. allies and friends in East Asia who do not wish to see the region polarized,” he said.

“The U.S. that tries to work with our friends and allies will discover that they do not support a hardline approach to China, and I think that will have an impact overtime,” Roy added.

The former ambassador, also founding director emeritus of the Kissinger Institute on China and the U.S. at the Wilson Center, a think tank in Washington, suggested “as the first step, it would be useful for both China and the U.S. to tone down their rhetoric toward each other.”