Analysis: How Should China Adjust Its Energy Mix to Meet Carbon Reduction Goals?

By Chen Xuewan and Bai Yujie 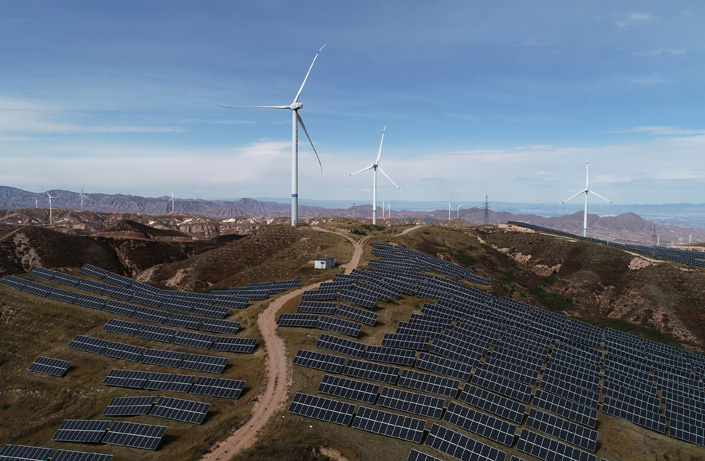 A year has gone since China proposed its commitment to two carbon goals, bringing its carbon dioxide emissions to a peak before 2030 and becoming carbon neutral by 2050. Since then, how to realize China’s goals has been a main focus of the energy industry. A statement from China’s Politburo late last month brought even greater attention to the issue.

The statement proposed that overall and well-organized measures must be taken to achieve peak carbon dioxide emissions and carbon neutrality, including formulating an action plan on CO2, making nationwide plans and bringing an end to “campaign-style carbon emission reduction” by breaking traditions and establishing innovative mechanisms, as well as resolutely curbing the haphazard development of projects that cause high pollution and energy consumption.

Among them, ending “campaign-style carbon emission reduction” is a term that has never before appeared in statements from China’s top decision-making body when talking about the dual carbon goals. Many insiders see it as addressing unscientific carbon reduction tendencies that have emerged over the past year.

In retrospect, since the Chinese government put forward the two carbon goals at the 75th session of the General Assembly of the United Nations (UN General Assembly) on Sept. 22, 2020, some regions have rigidly canceled all high-carbon projects, while others have taken radical approaches to reduce excessive coal-fired power generation capacity. For example, Yulin in Shaanxi province, which is lacking energy consumption indicators, temporarily suspended a few coal chemical projects under construction, while the Standing Committee of the Xi’an Municipal People’s Congress made a decision to basically close existing coal-fired thermal power enterprises by the end of the 14th Five-Year Plan period. In addition, some places have even attempted to increase their carbon emissions and in that way “peak carbon dioxide emissions.”

In some green and low-carbon areas, investment has been ignorant and fanatical, moreover it has often seemed to be a case of getting on the bandwagon. For example, hydrogen, as a clean secondary energy source, has attracted more than one third of centrally state-owned enterprises to set out corresponding layouts, while a number of private enterprises in the energy sector also race to put forward hydrogen energy planning. To be sure, a large injection of capital has provided a financial guarantee for key technological breakthroughs in hydrogen energy. However, when the industrial chain has yet to be opened and the business model remains unclear, such an intensive layout of enterprises could lead to overcapacity.

China plans to achieve peak carbon dioxide emissions in 10 years and carbon neutrality in 30 years, and the timetable for carbon emission reduction is pressing. This reduction should also be compatible with multiple objectives such as economic development and energy supply, therefore it requires systematic and scientific top-level designs and action plans.

In 2021, the energy supply situation, including electricity, has revealed the complexity of the problem.

In terms of economic recovery in the post-pandemic era, the supply of thermal coal, which accounts for half of the energy consumption structure, has been in short supply since the beginning of the year. This situation coincides with the drying up of water in spring and summer, and the low effective capacity of fluctuating energy such as wind and photovoltaic, resulting in the need for many places to prioritize their use of energy. Even Shaanxi, which ranks third in coal production in China, recently proposed that large coal enterprises in areas under its jurisdiction should give priority to coal resources available for power supply in the province.

According to China’s public plan, the country aims to double its 2020 per capita GDP by 2035, meaning that the per capita GDP needs to grow at an average annual rate of nearly 5% in the coming 15 years. In this context, the “cake” of energy consumption is bound to continue to expand and cannot be reduced. The structure of energy consumption will certainly see an accelerated adjustment, thus facilitating the rise of low-carbon energy. With this expectation, China’s capital market has set off rounds of speculation crazes in new energy concept stocks since the beginning of the year.

Under the twin carbon goals, with access to more new energy and improvements in electrification on the demand side, fluctuations of supply and demand will increase, and the difference between peak and valley load of electric power systems is bound to increase too. Power shortages may occur more frequently during the 14th Five-Year Plan period.

The central government has proposed to pursue the two carbon goals by establishing innovative mechanisms and breaking traditions. But we should not “break” anything before we “make” something. It is imperative to approach the two carbon goals step by step in a planned way.

Moving forward, the power system will be a key link in the transition to low-carbon energy. The central government also proposed to build a new-type electrical power system with new energy as the main body — implying that new energy, mainly including wind and solar power, will increase sharply while coal-fired power is still likely to increase, instead of being “cut off” immediately.

At present, according to the estimates of relevant institutions, China’s electricity consumption is expected to reach 9.5 to 9.8 trillion kWh by 2025, and during the 14th Five-Year Plan period, the average annual growth rate is to be 4.8% to 5.5%, with new electricity consumption of 2 to 2.3 trillion kWh and a corresponding increased power load of more than 400 million kW.

Filling this gap not only requires additional electrochemical energy storage to effectively improve installed new energy but also coal-fired and gas-fired power. According to the realities regarding economic structure and resource endowment, coal-fired power should be positioned as a strategic transitional domestic resource during the period of the 14th Five-Year Plan. In the long run, however, excessive coal-fired power will indeed be reduced, but in a safe and proper way.

In the meantime, electric power system reforms should continuously go deeper and, depending on the market mechanism, the power generation side should be further opened to allow the signal of time-divided prices in the spot market to be transmitted to the user side, so as to “cut” peaks. Further, China has launched a national carbon market, where the power industry is the highest carbon-emitter. But the lagging construction of the power market restricts the transmission of price signals in the carbon market. Hence, accelerating the top-level design of the power market and establishing a reasonable price transmission mechanism have become urgent needs.

Besides, energy mix adjustment will also have an impact on the pillar industries of major provinces of energy, such as Inner Mongolia, Shanxi and Shaanxi. If the economic transformation is pushed too aggressively, it will be difficult for the relevant regions to cope with the social costs caused by issues including personnel transfer and settlement and tax erosion, within a short time. So, what should be done before we “break” is to identify new drivers of economic development in the light of the actual situation.

But while being wary of “campaign-style carbon emission reduction,” we should also avoid going to another extreme — “campaign-style carbon emission.” Although it is planned that carbon emissions should peak prior to 2030, if this is understood as pushing us to peak the emissions as soon as possible by vigorously launching energy-intensive projects, it will leave greater carbon reduction pressure to the later stages and increase the costs for achieving carbon neutrality. Thus, local governments need to do away with the conventional way of driving GDP growth in the short term by way of industries with high energy consumption and high emissions.

In order to solve the problem of electric coal shortage, the National Development and Reform Commission (NDRC) recently introduced a succession of measures to augment coal supply and give policy support in terms of the increase of coal capacity after auditing. But it should be noted that this is just a policy-level move to adjust coal supply-demand tension during that stage, and it will not change the long-term trend of falling coal consumption. Senior leaders have made it clear that the growth of coal consumption should be strictly controlled during the 14th Five-Year Plan period and consumption should be gradually reduced during the 15th Five-Year Plan period. Judging by the path to realization of the two carbon goals, the proportion of coal-fired power in the electric power supplying structure will be a trend that is hard to resist.