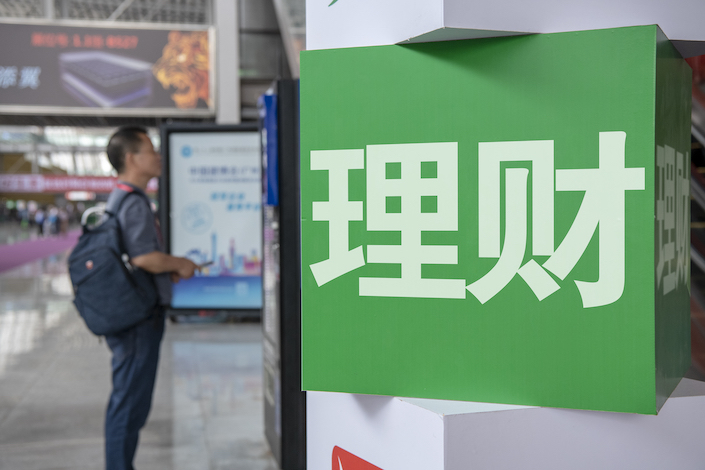 Chinese regulators made clear that open-ended WMPs valued at amortized cost won’t be renewed or issued after the transition period closes at year-end.

With four months left in the transition to sweeping new rules covering China’s $13 trillion asset management industry, regulators make clear what not to do after the year-end deadline.

Except for a few large banks with a huge burden of nonstandard assets, it won’t be difficult for most institutions to dispose of the affected assets as long as they aren’t nonperforming assets, a person at a WMP unit told Caixin. Regulators in the first half of this year already ordered banks to speed up the disposal of remaining nonstandard credit assets, the person said.

The real challenge will be how to preserve the overall scale of asset management products while disposing of nonstandard assets, the person said. Regulators may not pay much attention to the ranking of banks’ assets under management, but leaders of commercial banks do, he said.

The China Banking and Insurance Regulatory Commission (CBIRC) didn’t respond to a Caixin request for comment.

Regulators made clear that open-ended WMPs valued at amortized cost can’t be renewed or issued after the transition period closes at the end of 2021, participants in the meeting said.

Under the new rules, WMPs are supposed to be valued based on net assets, and returns will fluctuate. The net value of financial assets in which bank WMPs invest should be calculated at market value, though exceptions apply to a few types of assets that can use amortized cost.

In July 2018, China’s central bank issued a guideline giving cash WMPs leeway and allowing them to be valued using amortized cost and a shadow pricing method during a transition period. When the final rules were issued June 11, the transition period for cash WMPs was set at Jan. 1, 2022.

But the extended transition applies only to cash WMPs, financial products with short maturities and flexible redemptions that are equivalent to cash. They include short-term deposits with maturities ranging from one day to two weeks, short-term central bank notes, financial bonds and corporate bonds with high credit ratings. As they can do with money market mutual funds, investors can buy and redeem cash WMPs daily.

In the recent meeting with banks, regulators made clear that other fixed-term open-ended WMPs have to meet earlier deadlines for using market value-based valuation methods.

Any assets newly invested directly and indirectly by WMPs after Sept. 1 should use market values to calculate their valuation, the regulars said. That doesn’t apply to cash WMPs with a closed period of more than six months and investments in bonds for the purpose of receiving cash flow and holding till the maturity of the bonds. Those products are allowed to use an amortized cost method, the regulators said.

It is temporarily not allowed to use the cost method to calculate the valuation of assets other than the equity of unlisted companies. For existing assets in WMPs that have been valued by the cost method, rectification should be completed by the end of October.

Due to previously unclear valuation rules during the transition period, some financial institutions used the cost method to calculate the valuation of investments in private placement notes, nonlisted corporate bonds, banks’ perpetual bonds and longer-term tier 2 bonds, to reduce volatility of the net value of the assets.

Now institutions may face greater pressure for rectification. According to market participants, in the last two days, the prices of bank perpetual bonds and tier 2 capital debt have fluctuated widely because the assets are under selling pressure, market participants said.

Some analysts said they think the new regulation is a good thing for banks and WMP units that have meet requirement because it will remove noncompliant competition.

According to the July 2018 guidance, appropriate arrangements can be made after the transition period on a case-by-case basis for the remaining nonstandard credit assets that are hard to return to balance sheet for special reasons.

Regulators previously set a final deadline of 2025 for the disposal of these assets, Caixin learned. But at the recent meeting, that deadline was shortened to the third quarter of 2022, Caixin learned from people familiar with the meeting.