By Lin Yunshi and Cai Xuejiao 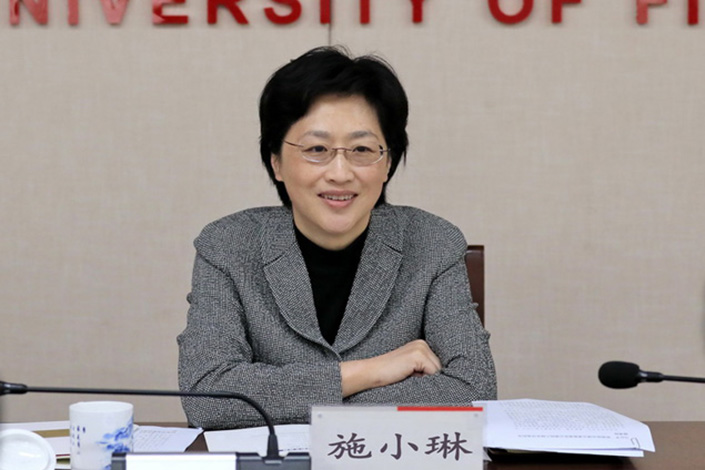 Shi Xiaolin (施小琳), a former Shanghai official and Communist Party standing committee member in Jiangxi province, has been named party chief of Sichuan’s Chengdu, becoming the latest in a string of female leaders to be promoted to senior regional party roles this year in a move which makes her the youngest figure to hold that position in any provincial capital.

The appointment was announced at a meeting of the city’s leaders and cadres on Sunday, according to local official media. The 52-year-old has also been named as a member of the standing committee of the Sichuan Provincial Party Committee, the province’s top authority.

Shi is the first female party chief of Chengdu in 40 years, and she is the youngest female standing committee member of any provincial party committee. Earlier this year, two other female politicians, Wu Guiying and Han Liming, were named as party chiefs of provincial capital cities Changsha and Nanjing, respectively.

Born in 1969 in eastern China’s Zhejiang province, Shi has studied and worked in Shanghai for more than three decades. She holds a master’s degree in business administration from the city’s Tongji University.

In 2017, she was named as a standing committee member of the Shanghai Municipal Party Committee and became the head of the committee’s United Front Work Department, a vice-provincial level position.

And in 2018, she moved to the central China’s Jiangxi province, serving as a member of the standing committee of the Communist Party’s Jiangxi Provincial Committee and head of the committee’s publicity department.

And Wang Lixia, formerly secretary of the Hohhot Municipal Party Committee, has succeeded Bu Xiaolin as the chairwoman of the Inner Mongolia autonomous region.