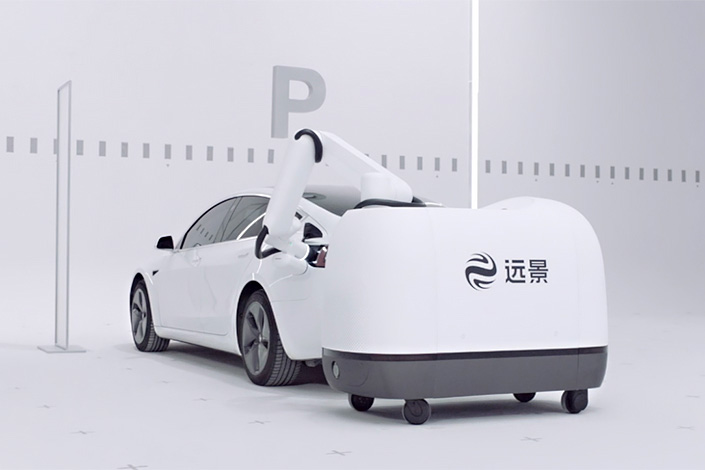 (Nikkei Asia) — One of China’s biggest wind-turbine makers plans to tackle the country’s chronic shortage of electric vehicle charging points: mobile robots that bring the juice to the car.

Envision Group plans to start testing its Mochi robot — so named because it provides mobile charging services — in Shanghai this year. The robot is also being shipped to Singapore.

The company aims to make the robot available through a smartphone app-based membership service that will allow drivers to leave their cars for Mochi to find and charge automatically.

“Your parking will totally change ... you don’t spend time looking for charging stations. You don’t need to wait in your charging station,” Envision’s Chief Executive Lei Zhang told Nikkei Asia in an interview. “We can put the robot in all car parks for big buildings,” he said.

As many countries aim to shift from gasoline-powered cars to more environmentally friendly vehicles, building the charging infrastructure to support EV drivers has been a key challenge. And even with a sufficient number of charging points, charging EVs takes longer than fueling conventional cars.

Mochi is designed to make life a little easier for EV drivers, but it is also part of Envision’s larger ambition: to tackle climate change by creating a new type of energy system. The company is the world’s fourth-biggest wind turbine maker after Vestas, General Electric and China’s Goldwind, having installed 10.7 gigawatts in 2020, according to the Global Wind Energy Council. The group also has a battery business, which supplies Japanese carmaker Nissan Motor.

Zhang hopes to create an energy system in which wind and solar power replace coal in electricity generation, and batteries and hydrogen replace the fossil fuels used in transportation.

“You also need a new grid,” he said, which he envisions as a digital platform for “connecting all the devices to achieve synergy between supply and demand.”

Zhang previously worked in the financial sector but decided to get out, he said, when he saw signs of a global crisis. Wanting to “do something more meaningful” and sensing opportunities in sustainability and renewable energy, he founded Envision in 2007.

Envision already uses digital technology to maximize the operating rate of wind farms, equipping each turbine with up to 500 sensors and using artificial intelligence to spot potential faults in equipment.

Envision uses its Internet of Things and AI systems to manage renewable energy facilities, buildings, and other parts of the energy infrastructure. It also makes lithium-ion batteries through its subsidiary Envision AESC, which comprises a former joint venture with Japanese companies Nissan Motor and NEC. The group’s annual revenue is about $8 billion, according to Zhang.

One of Envision’s ultimate objectives is to use the AI-driven IoT platform to adjust energy demand to supply, something that is necessary given the unpredictable nature of renewable energy.

If the world achieves net-zero greenhouse gas emissions by around 2050, as many governments are aiming for, “we [will] totally become a weather-dependent economy,” Zhang said. That is because unlike coal and oil, the availability of renewable energy is dependent on such factors as sunshine and wind.

Envision already has a weather forecasting system and is hoping to improve the accuracy of its predictions by creating its own satellite network. Meanwhile storing energy in batteries or other forms such as hydrogen when supplies are abundant would help ensure fluctuating demand can be met.

The widespread use of EV batteries would “have a huge impact on the energy system,” Zhang said, as it would make supply and demand more flexible.

On top of batteries to store energy, Envision is looking to develop its own hydrogen production equipment, Zhang said. Hydrogen can be generated by electrolysis, which breaks down water into hydrogen and oxygen by applying electricity. Zhang said he is looking for partners to work with Envision to develop renewable-energy powered electrolyzers.

Hydrogen is seen as a key technology to decarbonize sectors that are difficult to electrify, such as steelmaking and chemicals. It is also likely to be more suitable for long-haul transport and long-term storage than batteries. “Maybe in the future, every offshore wind turbine will have an electrolyzer, [so that] the output will be hydrogen,” Zhang said.

Zhang stressed that Envision Group is a global company and eyeing new markets, including Japan’s fledging offshore wind sector. He said he is looking for Japanese partners and hopes to “bring our technology to Japan to develop and incubate the Japanese local supply chain” for equipment such as blades and generators.

Envision’s battery business is based in Japan, with Nissan owning a 20% stake in AESC. The company this year announced plans to build factories in Japan and France to supply Nissan, Renault Group and other automakers. Zhang suggested that there are opportunities worldwide, saying that by being “open for [global] talent, open for partnership ... it gives you access to all countries.”