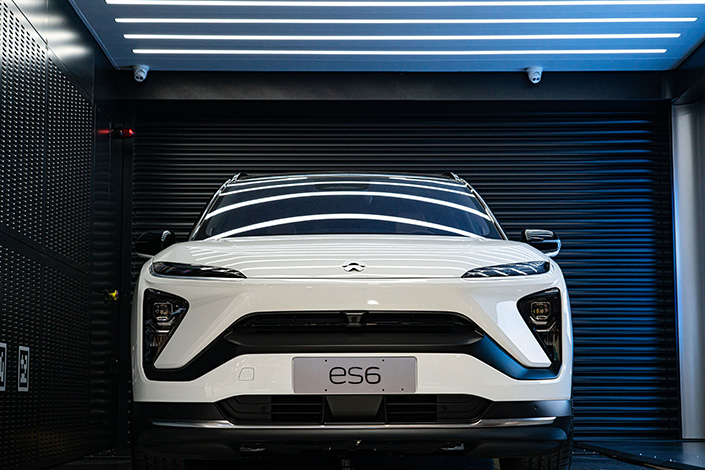 A Nio automobile on display in Shanghai on April 26. Photo: VCG

China is embarking on a building spree for battery swapping centers, as Beijing pushes electric-vehicle (EV) makers and others in the sector to build out necessary infrastructure to support its aggressive drive into clean vehicles

The nation’s network of such battery swapping centers numbered 716 at the end of June, nearly three times the amount at the end of last year, according to recently released data from the China Electric Vehicle Charging Infrastructure Promotion Alliance.

That call to action has prompted both EV-makers and others from related industries to announce plans to build thousands of such swapping stations over the next five years.

Among the three leading operators of such stations so far, only U.S.-listed Nio is an actual EV-maker. The company currently operates 308 battery swapping stations, more than half of which were built this year. The other two of the top three are Aulton and Hangzhou First Technology, which are both providers of EV-related services.

In May the Ministry of Industry and Information Technology (MIIT), which oversees the EV sector, proposed the launch of pilot programs nationwide in the second half of the year for different EV battery swapping business models.

In addition to EV-makers like Nio and related service providers like Aulton, traditional state-owned enterprises are also joining the campaign. In one such instance, oil refining giant Sinopec announced strategic tie-ups with both Nio and Aulton in April as part of a plan to build 5,000 battery swapping stations by 2025.

Major state-owned companies like Sinopec often pour their resources into helping Beijing reach its policy objectives, with commercial considerations often secondary in such matters. As one of China’s largest operators of filling stations, with more than 30,000 nationwide, Sinopec is particularly well positioned to assist in the campaign.

Following its Sinopec tie-up, Nio announced last week it aimed to have as many as 700 battery swapping stations nationwide by the end of this year — more than double its total midway through the year. It added its bigger goal is to have more than 4,000 swapping stations globally by 2025, with three-quarters of those domestic and the rest international as it tries to expand abroad.

Many other EV-makers are also including battery swapping stations in their individual five-year plans for 2021 to 2025. Beijing typically puts out a national roadmap for each such five-year period based on central objectives. Then individual companies, government departments and local governments craft their own five-year plans to help to meet those targets.

Aulton said it aims to have 10,000 swapping stations within the next five years. Traditional gas-powered car giant Geely unveiled its first battery swapping station last September, and said it planned to build 5,000 such stations by 2025.

An average battery swapping station can provide around 312 changing services per day. Shanghai currently has the most such stations in China with around 130, each with an average utilization rate of 42%.

The latest campaign comes as China’s monthly electric car sales continue to reach new highs, fueled by a combination of rapidly falling prices, improving technology and government incentives as Beijing strongly promotes the technology. New-energy vehicle sales hit a record of more than 200,000 in April, with sales of such cars reaching 732,000 units in the first four months of the year, according to the China Association of Automobile Manufacturers.

Through the end of April, China had some 6.29 million electric vehicles on the road powered by batteries with 298 gigawatt hours of capacity, according to the China Industrial Energy Conservation and Cleaner Production Association’s new-energy recycling commission.