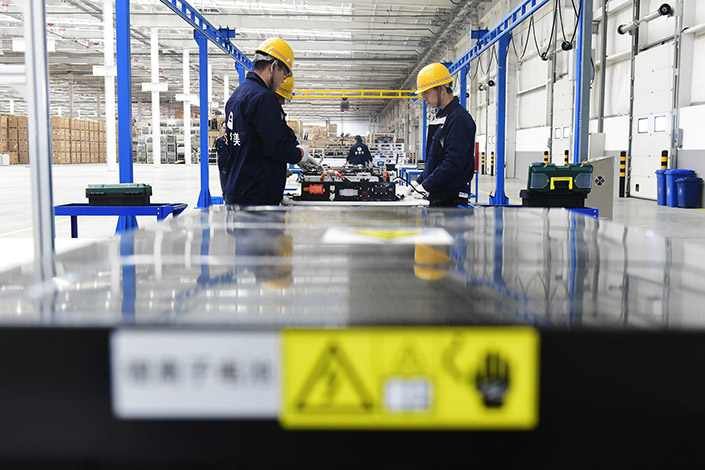 Battery recycling gear is installed in a facility in Tianjin. Photo: IC Photo

As China continues to add hundreds of thousands of new-energy cars to its roads each month, regulators are starting to worry about what to do with the millions of batteries that power those vehicles when they reach the end of their useful life.

The latest signal of that concern came on Wednesday in a new document detailing the responsibilities of car manufacturers published by the Ministry of Industry and Information Technology (MIIT), the industry’s overseer. Among its many points, the document pointed out that China’s carmakers should work to ensure efficient disposal of their products at the end of their lifespan.

It said manufacturers should make sure discarded batteries find their way into official authorized recycling channels, and also encouraged car owners to seek out such channels when disposing of batteries.

The latest signal comes as China’s monthly electric car sales continue to reach new highs, fueled by a combination of rapidly falling prices, improving technology and government incentives as Beijing strongly promotes the technology. New-energy vehicle sales hit a record of more than 200,000 in April, with sales of such cars reaching 732,000 units in the first four months of the year, according to the China Association of Automobile Manufacturers.

Through the end of April, China had some 6.29 million electric vehicles on the road powered by batteries with 298 gigawatt hours of capacity, according to Wang Pan of the China Industrial Energy Conservation and Cleaner Production Association’s new-energy recycling commission.

Most of the nation’s electric cars were made after 2015, meaning a peak for the disposal of the mountains of batteries that power them is still at least several years off. Wang estimated that 100 gigawatt hours’ worth of such batteries would need recycling over the next five years, as many of the electric cars that were made at the start of the nation’s electric vehicle boom dating back to around 2015 begin to near the end of their lives.

A battery is generally considered no longer usable for electric cars after it loses 20% or more of its capacity. Once that happens, batteries can either be recycled for their reusable components, or used in other devices like wireless base stations and electric scooters with lower requirements.

The most valuable reusable components include many of the metals that power such batteries, such as cobalt and nickel. But numerous bottlenecks in the current nascent recycling system mean many such batteries often don’t reach officially authorized recyclers, and may either end up getting dumped or recycled by illegal outfits with old technology and low or no environmental protection standards.

There are currently three main sources of discarded batteries: Those taken out during regular car maintenance, those from scrapped cars and those that fail to pass inspections during battery-makers’ actual production process, said Yang Xu, a senior researcher at the research arm of Gotion High-Tech Co. Ltd.

Yang said that substandard batteries created during the production process are generally disposed of properly. But those from the other two sources don’t always find their way into proper channels.

Overall, less than half of new energy vehicle batteries make it into proper recycling channels, with the remainder either discarded or recycled via illegal or unapproved channels, said Bao Wei, president of Zhejiang Huayou Recycling Technology Co. Ltd., one of 30 companies on a list of approved recyclers published by the MIIT in 2016.

Technology for such recycling is relatively expensive, especially compared to that used by illegal channels, giving the latter group much lower costs, experts point out. Illegal recyclers also cut corners by not using proper environmental protection equipment and procedures. That often leaves legal recyclers at a disadvantage to their illegal counterparts, since the latter can pay better prices for discarded batteries.

The relatively high cost of approved recycling also discourages the movement of discarded car batteries for use in other applications like scooters.