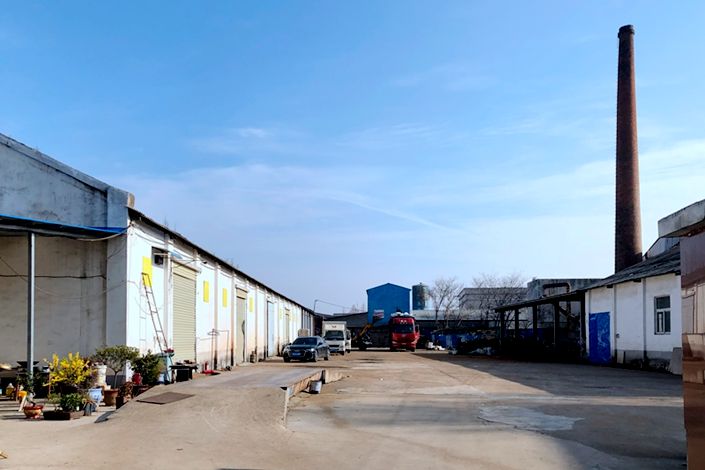 Yellow squares mark the walls of a row of warehouses used to store used batteries at the former site of Jiancheng Xingye Environmental Protection Technology on March 2. Photo: Zhou Tailai/Caixin

Dozens of people in central China, including some 20 environmental and law enforcement officials, are facing prison time for their alleged roles in a criminal gang that amassed tens of millions of yuan by rigging a lucrative local market for recyclable batteries.

The officials, some of whom have been sentenced pending appeals, have been accused of complicity in the illegal business ventures of Zhang Yanqian, a small-town school dropout who built a criminal enterprise through bribery, extortion and forced trading.

They include Ma Fuzeng, the former head of the environmental protection bureau in Xinyang, a city of 6.5 million people in Henan province, and Xie Xinlong, a local environmental law enforcement chief.

The sprawling case, which bears similarities to three others in the last three years, adds to evidence that criminal networks are gaining prominence in China’s emerging green industries. The Asian nation plans to phase out the sale of fossil fuel-powered vehicles by 2035, an aim that is stoking the rapid growth of its battery sector.

Ma, who previously also held a top role on Xinyang’s main political advisory body, was sentenced to seven years’ imprisonment in September for abetting a mafia-like organization, taking bribes and other crimes.

Xie, meanwhile, was convicted in August along with 11 others for abusing official power, but escaped a criminal sentence. Some of the accused, including the deputy director of Xinyang’s environment bureau, have not had their sentences made public, while others remain on trial.

Both Ma and Xie were judged to have provided protection to Zhang, a 54-year-old resident of a village near Xinyang who overcame his impoverished childhood to establish a successful local building materials firm and win a seat on the city’s political advisory body.

In 2015, Zhang became the controlling shareholder in a friend’s business that specialized in the disposal of rechargeable lead-acid batteries, a type commonly used in electric vehicles.

By the time authorities cracked down the following year, Zhang and his associates had created a monopoly in Xinyang’s battery recycling market through forced transactions, extortion and bribery. A court verdict states that the group’s illicit gains totaled some 24.6 million yuan.

A district court in Xinyang last year sentenced Zhang to 20 years in prison and some of his dozens of accomplices to up to 16 years behind bars.

China last month brought down the curtain on a three-year assault on organized criminal gangs, itself part of a wider anticorruption campaign that has ensnared more than 2 million officials since President Xi Jinping took power in late 2012, according to official statistics.

Xinyang is not the only place in China where so-called mafia-style organizations have taken over parts of the recyclable battery industry.

In 2019, a court in the eastern province of Jiangxi upheld the convictions of six illegal battery collectors who were sentenced the previous year to between 21 and 30 months in prison.