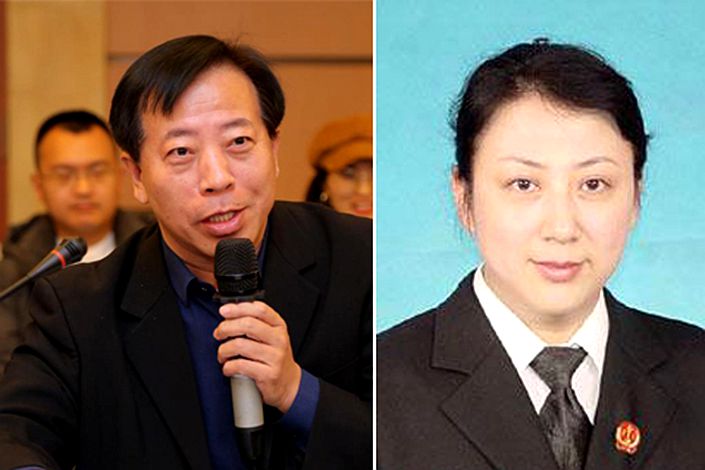 She Guiqing (left) and Guo Yanzhi

Three judicial officials in the Chinese capital of Beijing are under investigation for suspected corruption, as President Xi Jinping’s years-long crackdown on graft extends into the country’s law enforcement and justice systems.

She Guiqing, a deputy chief of the Beijing Internet Court, is suspected of “severe disciplinary and legal violations,” a common byword for corruption, according to a statement (link in Chinese) published Monday on the website of the Central Commission for Discipline Inspection (CCDI), the Communist Party’s internal graft-buster.

Earlier this month, the CCDI said it was probing the activities of Guo Yanzhi, the head of a civil division of the Beijing No. 1 Intermediate People’s Court, and Li Jianping, a deputy director of the political office of the Beijing High Court. Both are suspected of the same offense.

Since coming to power in late 2012, Xi has overseen a sweeping anti-corruption campaign that has ensnared more than 2 million officials, according to government figures.

According to his official biography, She, 52, of North China’s Hebei province, joined the internet court in August 2018. In addition to his role as a deputy chief, he is also a member of the court’s leading Communist Party group, a member of its judicial committee, and a judicial officer.

He has worked in the capital’s court system since 2000, prior to which he taught at several colleges and vocational schools.

Guo, 54, of East China’s Shandong province, began her career as a secretary at the Beijing High Court before transferring to the city’s No. 1 Intermediate People’s Court in 1995, according to her official biography.

Li, who is from the northern city of Tianjin and is his early 50s, assumed his role in the political department in April last year and is also the head of the Beijing High Court’s cadre office, a judicial officer and an inspector, according to his official biography.

During his signature anti-corruption crackdown, Xi has repeatedly urged party inspectors to go after both high-ranking “tiger” officials as well as lowly “flies.”

The campaign typically punishes illegal acts, such as taking bribes or embezzling funds, as well as violations of party protocol like holding “superstitious” beliefs or maintaining lavish lifestyles.

Perceptions about the extent of official corruption in China marginally improved last year, according to Transparency International, a Berlin-based graft tracker.

The organization ranked China 78th out of 180 countries and territories in its Corruption Perceptions Index, up two places from 2019.