After 46 Days on the Job, Qinghai Vice Governor Is Investigated for Corruption

By Matthew Walsh and Qin Jianhang 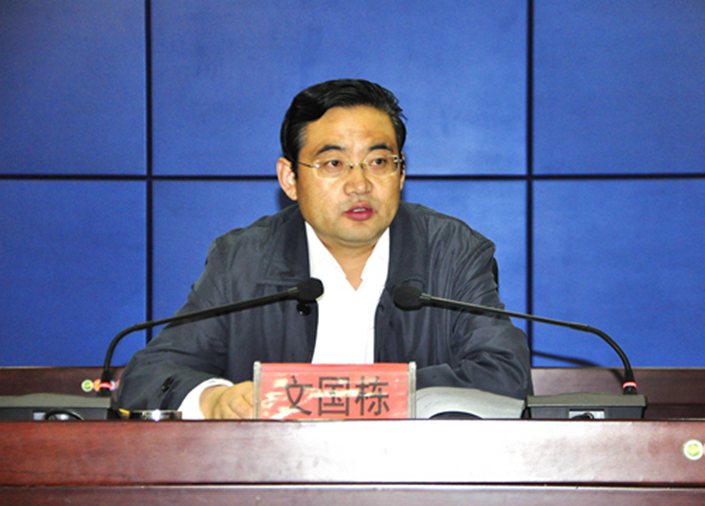 One of Northwest China’s most senior government officials is being questioned on corruption suspicions just weeks after rising to an influential new position, becoming the latest powerful politician to fall foul of the country’s anti-graft inspectors.

Wen Guodong, who became vice governor of Qinghai province 46 days ago, is being investigated for suspected “serious legal and disciplinary violations,” according to a short online statement (link in Chinese) published Sunday by the Central Committee for Discipline Inspection, the Communist Party’s internal graft-buster.

Although the statement does not give details of Wen’s misdemeanors, he also serves as the secretary of a party work committee overseeing an environmental protection area at the center of a vast illegal mining scandal.

The probe heralds the latest twist in a sweeping, years-long anticorruption campaign in which President Xi Jinping has urged inspectors to go after “tigers,” or high-ranking officials, as well as more junior “flies.”

Wen is a former broadcast journalist in his 50s who embarked on his political career in the early 1990s, according to a resume on the Qinghai provincial government’s official website that has since been taken down.

He became one of the resource-rich province’s nine most senior officials in July after five years as party committee secretary of Haixi Mongol and Tibetan autonomous prefecture in western Qinghai.

Since 2015, he has also headed the Qaidam Circular Economy Pilot Zone, a 250,000-square-kilometer area that aims to balance resource extraction with environmental sustainability.

The zone came under scrutiny last month following the detention of mining tycoon Ma Shaowei after state-affiliated newspaper Economic Information Daily published an investigation about an illegal coal-mining operation in the Qaidam Basin dating back more than a decade.

Ma’s company, Qinghai Xingqing Industry & Trade Engineering Group Corp., allegedly made (link in Chinese) more than 15 billion yuan ($2.2 billion) from extracting more than 25 million tons of coal in the basin without a permit since 2006.

The newspaper’s revelations prompted the dismissal of five party and government officials with responsibility for the zone, including other members of the Haixi prefectural government. Authorities also launched an inquiry into the incident.

Wen has not appeared in public since chairing a meeting of high level Haixi officials last Wednesday, where he emphasized the need to restore the ecology of local mining areas, according to a report by state-affiliated local newspaper Qaidam Daily.

He is the latest “tiger” to become embroiled in Xi’s flagship anticorruption drive. Since China’s most recent National Party Congress in October 2017, senior officials in all but four provinces on the Chinese mainland have fallen into the anti-graft dragnet, according to Caixin calculations.