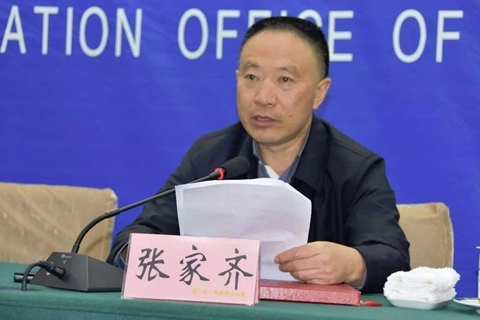 Zhang Jiaqi, a former deputy general manager of Moutai, has been investigated for serious violations of law and principle, the Communist Party’s anti-graft watchdog in Guizhou province, where Moutai is based, said Wednesday.

Zhang is the 13th senior executive of Moutai, the world’s most valuable liquor maker, to fall amid an anti-corruption cleanup at the company since the downfall of former Chairman Yuan Renguo in May 2019.

The graft buster accused Zhang in a statement of violating political rules, resisting investigation, illegal profit-taking, abusing power and taking an “especially huge amount” of bribes. Zhang received party punishments and was handed over to the judiciary system for prosecution. His illegal assets have been confiscated, the statement sad.

Signs of Zhang’s downfall emerged in February when he was removed as Moutai’s deputy general manager in a management revamp. No reason for Zhang’s removal was made public at the time.

Zhang, 59, was appointed deputy general manager of Moutai in 2011. Previously, he worked in the Huairen city government in Guizhou for 15 years, rising to deputy mayor.

Moutai, which became the world’s most valuable liquor company in 2017, has been at the center of an anti-graft storm since May 2019 when investigators targeted then-Chairman Yuan during a probe of Wang Sanyun, former party chief of the southwest province of Gansu, and Wang Xiaoguang, a former vice governor of Guizhou. The company later stepped up a reshuffling of its sales network and replaced most of its senior executives.

Investigators said Yuan used his position to gain benefits for others and received huge sums of bribes. Yuan was expelled from the party and stood trial on corruption charges in September 2019. Yuan pleaded guilty to the court but a sentence has yet to be announced.