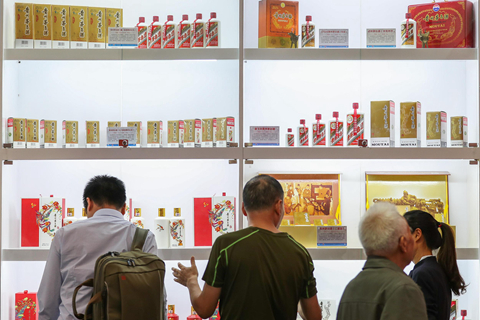 Moutai is not only popular among consumers but also coveted by collectors for its potential appreciation. Photo: VCG

Yuan Renguo, who was chairman of Kweichow Moutai Group between 2011 and 2018, was removed from all posts for taking an “extremely huge amount of bribes” and other “severe violations of discipline and law,” the Central Commission for Discipline Inspection (CCDI) said in a statement.

Yuan used dealer licenses for Moutai liquor as tools to pull political strings, the CCDI said. He was also involved in exchanges of sex, money and power, the corruption watchdog said.

The harshly worded charges came more than a week after Yuan was dismissed from his position as a standing committee member of the Guizhou Committee of the Chinese People’s Political Consultative Conference, a key government advisory body.

Moutai, known as China’s “national liquor,” is often served at Chinese state banquets and presented as a diplomatic gift. Distilled from fermented sorghum and other ingredients, the product is known for its high alcohol content and powerful, complex taste.

Caixin learned that Yuan’s downfall was linked to the corruption case of Wang Sanyun, former party chief of the southwest province of Gansu, and Wang Xiaoguang, a former vice governor of Guizhou, where the fiery alcohol is produced. Wang Sanyun and Wang Xiaoguang were both known for their fondness for Moutai.

Yuan was adept at forging good relationships with officials, a person close to Kweichow Moutai’s management said on the condition of anonymity.

“He sent bribes on behalf of officials and helped them get promotions,” the person said.

Yuan provided resources to help Wang Sanyun and Wang Xiaoguang climb the bureaucratic ladder, sources close to the matter said. As the pair fell, Yuan was also probed, they said.

Yuan’s abuse of Moutai’s dealership licenses led to artificial inflation in the price of the liquor, the source said. Most large dealers Yuan designated have deep political backgrounds, he said.

Moutai is not only popular among consumers but also coveted by collectors for its potential appreciation. The official retail price for a new, 500-milliliter bottle of Moutai is currently 1,499 yuan ($220). But as the liquor is often in short supply, the actual market price can go over 2,000 yuan a bottle. A 2017 bottle of Moutai’s flagship Feitian with 53% alcohol content now carries a price tag of 2,299 yuan on the online shopping platform JD.com.

In the statement, the CCDI also accused Yuan of “family-style corruption” — meaning close-knit relatives in key positions were also involved in the alleged misconduct — and resisting authorities’ investigation.

The 63-year-old Yuan became the chairman of Kweichow Moutai after spending more than four decades working for the company. During his tenure as boss, Yuan was known for his bold approach to expanding Moutai’s sales network and diversifying its product selections. Yuan has repeatedly attributed Moutai scarcity to limited production capacity.

Kweichow Moutai has retained its title as the world’s most valuable liquor company since early 2017, when its Shanghai-listed arm’s market value exceeded that of British whisky giant Diageo PLC.

This story has been corrected to accurately reflect the information available in CCDI’s statement about Yuan Renguo’s sex-related misconduct.