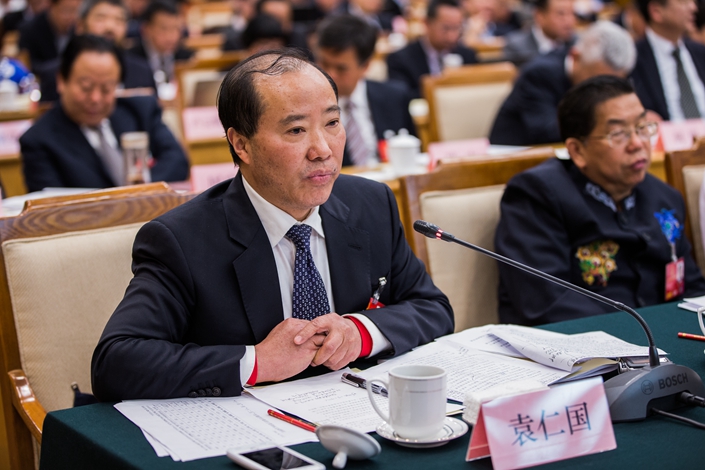 The former chairman of Chinese liquor-maker Moutai has been removed from his seats on a key government advisory body, with a source saying that the dismissal may have been related to him abusing his power and messing with the market.

Yuan Renguo, the ex-chairman of Kweichow Moutai Co. Ltd., has been dismissed from his position as a standing committee member of the Guizhou Committee of the Chinese People’s Political Consultative Conference (CPPCC).

Yuan has also been relieved from two other positions on the committee, according to an official statement (link in Chinese) released Sunday. The statement didn’t offer a reason for Yuan’s dismissal, but Caixin has learned from a source that it may have been related to Yuan abusing his power to designate dealers, leading to an artificial inflation in the price of Moutai liquor during his tenure as chairman from 2011 to 2018.

Yuan, 63, was appointed Moutai’s chairman in 2011 after spending more than four decades working for the company. He was elected to the standing committee of the Guizhou Committee of the CPPCC in early 2018, a few months before he stepped down as the company’s chairman in May that year. In China, CPPCC membership usually has political value for executives at state-owned enterprises.

He was replaced by Li Baofang, who had only been with Moutai for about three years following a stint working for the government.

Based in Southwest China’s Guizhou province, Moutai is one of the country’s most famous brands of a Chinese grain alcohol called “baijiu.” The Shanghai-listed company has retained its title as the world’s largest liquor company since early 2017, when its market value exceeded that of British whisky giant Diageo PLC.

In late 2017, Moutai announced that it would increase factory-gate prices across its line of baijiu products by 9% to 25%, sending its share price rocketing to a record high at the time.

Caixin has learned from multiple sources close to the company that Yuan has been adept in forging good relationships with suppliers and dealers. A source familiar with the matter said Yuan used his position to select some as the company’s designated dealers, who then managed to inflate the price of the liquor.

After taking over Moutai early last year, Li began an overhaul of the company’s dealership system “under the order of the Guizhou government,” the sources said.

A source familiar to the company’s dealership system told Caixin that four types of dealers were targeted in the crackdown, including those designated by former company executives, and those controlled by company employees.

Last, year, Moutai severed ties with more than 600 of its dealers, the company said in its annual financial report in March.