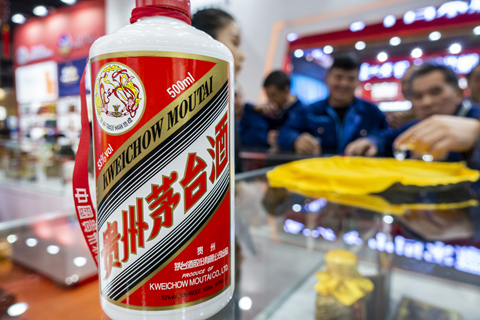 Shares of the most famous Chinese liquor brand plunged almost 12% in three days, slashing the market cap of the world’s most valuable distiller by more than 110 billion yuan ($16 billion), as the company’s move to sell more liquor directly to consumers created a public outcry and drew regulatory scrutiny.

Kweichow Moutai Co., the publicly traded maker of Moutai liquor, received a letter from the Shanghai Stock Exchange Tuesday night asking for an explanation of why the state-run parent company, Kweichow Moutai Winery Group, established a direct sales unit. Investors and analysts said they are worried that the move could siphon off profits from the listed company.

Kweichow Moutai Group Marketing Co. was formally created May 5 as a wholly owned subsidiary of the parent group to run its own direct-sales network. The parent company said the new sales network would focus on group buyers and retailers and would complement the current nationwide network of dealers.

Since the beginning of this year, Moutai has launched a major overhaul to increase the proportion of direct sales and reduce the number of dealers. According to Moutai’s 2019 sales plans, 17,000 tonnes of liquor are assigned to dealer channels, accounting for about 55% of the total sales target, down from about 80% in 2017. In 2018, only about 6% of revenue came from sales at the company’s own stores and on its online retail platform, and the rest came from the dealer network.

Investment bank Bernstein downgraded its rating on Moutai shares Monday to “market perform” from “outperform,” slashing its target price to 916 yuan from 1,089 yuan, citing the likelihood that the parent company’s new sales unit might erode Moutai’s revenue and governance. But China International Capital Corp (CICC) upgraded its target price for the stock to 1,250 yuan, saying the stock is undervalued and projecting positive result from the restructuring. The stock closed Tuesday at 884.40 yuan.

Several market participants told Caixin that it’s not clear whether the newly formed company will take over some or all of Moutai liquor’s sales channels.

Moutai’s namesake liquor, known as China’s “national liquor,” is often served at Chinese state banquets and presented as a diplomatic gift. Distilled from fermented sorghum and other ingredients, the product is known for its high alcohol content and powerful, complex taste. The liquor is not only popular among consumers, but also coveted by collectors for its potential appreciation.

The official retail price for a new, 500-milliliter bottle of Moutai is currently 1,499 yuan ($220). But as the liquor is often in short supply, the actual market price can go over 2,000 yuan a bottle. A 2017 bottle of Moutai’s flagship Feitian with 53 percent alcoholic content now carries a price tag of 2,299 yuan on online shopping platform JD.com.

It’s commonly believed older Moutai tastes better. A 1957 bottle of Moutai sold for 2.16 million yuan at an auction last year, setting the record for the most expensive liquor sold.

The establishment of the group-owned sales network aims to streamline the sales channels and crack down on abnormal pricing, liquor industry expert Cai Xuefei said. The current huge dealers’ network has led to a short supply of the liquor, he said.

In the first quarter this year, the company disqualified 476 dealers, about 20% of the nationwide total, citing violations of sales regulations or ties with Moutai employees or local government. Analysts said they expect the sales quota originally assigned to these dealers to be taken over by the parent-owned unit instead of being distributed to remaining dealers.

Dealers get the liquor from the factory for 969 yuan a bottle, but Moutai’s own channels sell it at the official retail price of 1,499 yuan a bottle. This means that every tonne of liquor sales going to direct channels from dealers can contribute about 1.13 million yuan of profits to the listed company.

The 476 disqualified dealers originally had an estimated 6,800 tonnes of sales quota, which means the new direct-sales unit could take about 7 billion yuan of profits from the listed company.

The parent group recently also took out 600 tonnes of sales quota from the listed company and solicited public bidding from supermarket retailers.

Although that amount is not significant, it is intended to test the waters with a clear direction, aiming to find reliable supermarket retailers and large and medium-sized enterprises as customers, according to a research report by China Merchant Securities Co.