By Matthew Walsh and Huang Yuxin 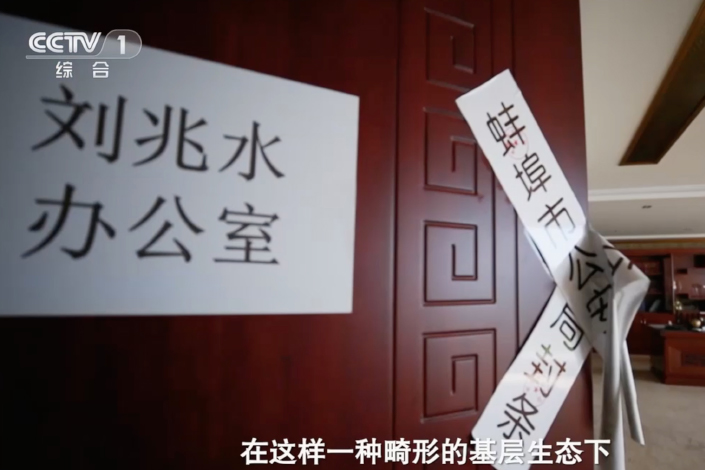 A village official's office is sealed off. Photo: CCTV

From financial bigwigs taking eye-popping bribes to small-town village chiefs with a history of embezzlement and murder, China’s years-long crackdown on official corruption is littered with stories that seem made for TV.

Now, a new government-produced documentary series is bringing some of the country’s most egregious graft cases to the nation’s screens, while being careful to shine a strictly positive light on a flagship Communist Party policy.

“Crackdown on Crime: For the Country’s Prosperity and the People’s Safety,” a slick six-part collaboration between China’s anti-mafia office and the state-owned China Media Group, is being shown by state broadcaster CCTV every night through Wednesday.

Featuring interviews with victims, police and party officials, as well as a hefty dose of patriotism, the show spotlights a selection of big-ticket organized crime cases and describes how police busted the perpetrators.

Since coming to power in late 2012, Chinese President Xi Jinping has exhorted party bodies to go after high-ranking corrupt officials, or “tigers,” as well as lower-ranked “flies.”

The clampdown targets a wide range of behavior deemed illegal or unethical, such as paying or accepting bribes, misappropriating public funds and soliciting prostitutes. More than 2 million officials have been punished during the campaign, according to government figures.

China’s government says the anti-corruption drive improves governance and strengthens public faith in the party. Critics say the campaign is partly a front for rooting out political opponents.

The first episode of “Crackdown on Crime,” which premiered Saturday on state broadcaster CCTV, told the story of four brothers surnamed Liu who were imprisoned in 2019 for crimes including the destruction of more than 100 grave sites in an eastern Chinese village to build a lavish hall commemorating their ancestors.

The brothers, who built a fortune through illegal mining, packed the local government with family members, wooed higher officials with gifts of expensive alcohol, and silenced visitors who complained that dangerous extraction techniques were damaging their homes.

Before their downfall, the brothers were appointed deputies to municipal and provincial legislatures in East China’s Anhui province. They also received government-issued honors for sending excavators to assist with relief work following the deadly 2008 Sichuan earthquake.

Footage from the documentary shows residents pointing out cracked and broken masonry and dust-shrouded open-pit quarries, before cutting to shots of fluttering red flags as the narrator says the party “completely prohibits” local tyrants. Police are then seen leading away hooded men purporting to be the Lius and their dozens of associates.

Later in the same episode, the narrative pivots to the case of a criminal gang that terrorized (link in Chinese) a county in East China’s Jiangxi province for 14 years. The scandal led to the deaths of six people and caused severe injury to three, according to public records.

The case was notable for the gang’s substantial hoard of firearms, including Makarov pistols of the type used by police in many Eastern European and former Soviet republics, according to the documentary. The ringleader, Chen Huimin, was sentenced to death in 2019 and executed last November.

Sunday’s episode detailed the downfall of Huang Hongfa, a businessman in the island province of Hainan who cultivated local police, commerce, market supervision, water and land officials for three decades while he amassed billions of yuan through extortion, forced trading and violence. He was sentenced to death in January 2020 and executed in July.

“Crackdown on Crime” is not the first Chinese TV show to dwell on official corruption. In 2017, “In the Name of the People,” a government-funded drama about a prosecutor pursuing unscrupulous officials in a fictional city, broke ratings records and drew comparisons to the hit U.S. series “House of Cards.”

Xi’s anticorruption drive has continued unabated since the conclusion of the “Two Sessions” annual political meetings at the beginning of March.

On Tuesday, top party leaders including Xi attended an award ceremony to honor party graft-busters who distinguished themselves during a three-year campaign on organized crime that ended earlier this month, the state-run Xinhua News Agency reported.

Chinese courts concluded tens of thousands of cases involving a total of more than 220,000 people as part of the crackdown, the head of the Supreme People’s Court said at the Two Sessions.

In a sign that the campaign is extending into China’s law enforcement and justice systems, party discipline inspectors recently detained three judicial officials in the Chinese capital of Beijing on corruption-related allegations.