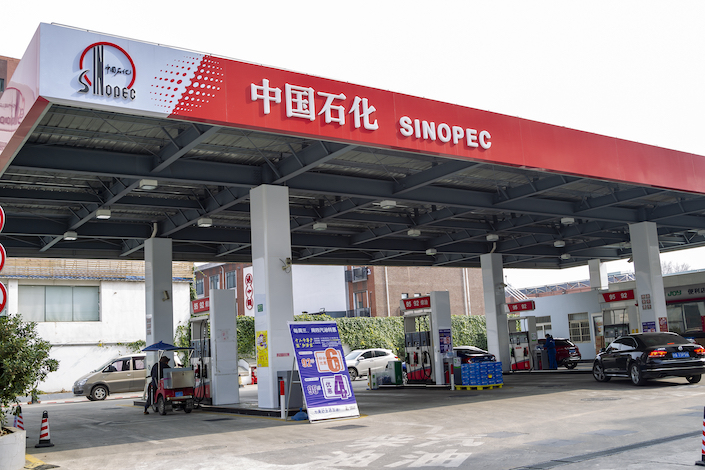 A Sinopec gas station in Shanghai.

China Petroleum & Chemical Corp. (600028.SH), or Sinopec, swung to a net profit of 39 billion yuan ($6 billion) in the first half of 2021, thanks to a rebound in oil prices and an increase in output and sales. The state-owned energy giant reversed a loss of 23 billion yuan a year ago when oil prices plunged and production was shut down amid the Covid-19 pandemic. First-half revenue was up 22.1% to 1.26 trillion yuan, according to an earnings report published Monday on the Shanghai Stock Exchange.

Several main power suppliers of Beijing, including GD Power Development, Datang Power, Huaneng Group and Jingneng Power, sent a joint letter to the Beijing Municipal Commission of urban management asking to withdraw from electricity purchase contracts for the fourth quarter. According to the statement, coal-based power units in Beijing, Tianjin and Tangshan have been suffering from high coal prices this year, mainly caused by coal shortages. Meanwhile, electricity prices in Beijing dropped, causing financial losses. The companies said they are unlikely to fulfill contracts to supply electricity for Beijing in the fourth quarter. Domestic coal prices remain high even though China released more than 10 million tons of coal from reserves in July.

Northeastern China’s Ansteel reported a net profit of 5.2 billion yuan ($801 million) in the first half, up 936.6% from a year earlier. Revenue rose 62.49% to 72.6 billion yuan. The steelmaker cited record high production and rising sales as well as improvements in energy efficiency. The company became the world’s third-largest steelmaker after taking a 51% stake in Bengang Group.

China Zhongwang Holdings Ltd., the world’s second-largest industrial aluminium extrusion product developer and manufacturer, suspended trading Monday and said it would delay publication of its 2021 interim financial report. The company might face a fine as its founder Liu Zhongtian, who was accused of $1.8 billion of tariff evasion, was convicted last week by a U.S. federal jury.

Chinese lithium processor Qinghai Salt Lake Industry Co. Ltd. (000792.SZ) reported a net profit of 2.1 billion yuan ($325 million) in the first half, up 53% from a year earlier, as prices surged for lithium salts and potassium chloride. Revenue dropped 36% to 6.2 billion yuan, mainly due to a decrease in trade income and chemical sales.

Tianqi Lithium back in the black on surging prices

Tianqi Lithium Corp. (002466.SZ), one of the world’s biggest producers of the commodity, recorded its first half-year profit in two years of 85.8 million yuan ($13.3 million), thanks to a jump in sales and prices of the company’s lithium products amid booming battery demand for electric vehicles. The Sichuan-based company recovered from a loss of 697 million yuan in the same period last year, according to an earnings report released Monday on the Shenzhen Stock Exchange. In the six months through June, revenue jumped 25% to 2.4 billion yuan.

The local government of Shenyang, capital of northeastern China’s Liaoning province, plans to launch a regional carbon-trading market Sept. 1. Emission allowances and certified emission reductions will be traded on the market, which will be open to companies and individual investors.

Chinese battery producer SVolt announced the installation of its non-cobalt battery package in Great Wall Motor Co. Ltd.’s new Ora SUV. The battery — the world’s first such power pack that doesn’t rely on the scarce, toxic metal — has a capacity of 82.5 kilowatt-hours and is expected to support a driving range of more than 600 kilometers for the car.

Contemporary Amperex Technology Co. Ltd. (300750.SH) continued investing in private equity funds since April, according to a local media report. The battery manufacturing giant’s investments might aim to foster a robust industry chain for itself, said Wu Hui, general manager of the research department of the Ivy Institute of Economic Research.

Shenhua Energy (601088.SH), China’s largest state-owned coal mining enterprise, reported a net profit of 26 billion yuan ($4 billion) in the first half, up 26% year-on-year. Revenue rose 37% to 144 billion yuan. The company cited robust domestic coal demand. The company also projected the abatement of coal shortages and a slight decline in coal prices in the second half.