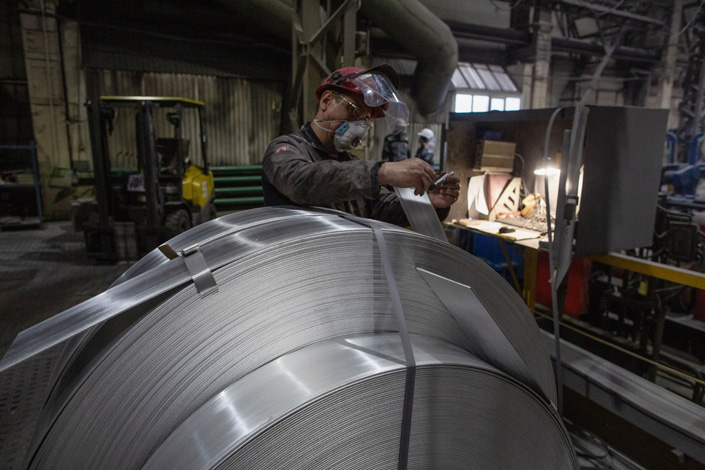 (Bloomberg) — Aluminum charged to a 10-year high in London, extending a year-long rebound as demand surges and supply of the usually abundant metal comes under pressure.

Prices rallied as much as 2.9% to $2,726.50 on the London Metal Exchange, hitting the highest since 2011 and moving closer to an all-time high above $3,300 a ton. That’s fueling wider inflation concerns, with Goldman Sachs Group Inc, Citigroup Inc. and Trafigura Group among those forecasting further gains as the industry braces for a potentially seismic shift into deepening deficits.

Supply is increasingly challenged, particularly in top producer China. The energy-intensive aluminum industry has come into Beijing’s crosshairs during a crackdown on pollution, while a seasonal power crunch has also dented output. That drive continued this week as Guangxi province, an aluminum hub in the southwest, moved to cut production.

“A slew of Chinese policies has recently come to affect aluminum output, pushing prices higher,” Wei Lai, an analyst with TF Futures Co., said by phone from Shanghai. “Policies including the power consumption cap are expected to stay through the rest of the year. So the upside momentum remains for aluminum. Prices can hardly retreat as long as demand remains intact.”

The metal, which is used in everything from car parts to drinks cans and home appliances, fared particularly badly at the onset of the pandemic, but is now enjoying a strong resurgence as consumer demand and economic activity bounces back.

In the years to come, demand looks set to soar in electric vehicles and renewable energy, and efforts to rein in the aluminum industry’s heavy carbon footprint could spell the end of a decade-long era of oversupply.

The rally is creating a huge windfall for producers who’ve been plagued by weak prices for years, and have often been pumping out metal at a loss. But the gains over the past year are adding further fuel to concerns over inflation as manufacturers increasingly look to pass on costs to consumers.

Aluminum rose 2.6% to settle at $2,718 a ton on the LME. The metal has rallied almost 40% this year, second only to tin among six base metals on the bourse. Orders for LME aluminum rose 10% on Tuesday, the most in two months. All metal prices except lead were higher, with copper climbing 1.2% and nickel advancing 2.8%.

China produces around 60% of the world’s aluminum and the concerns around output prompted some of the country’s largest smelters to hold a video call on Monday in which they pledged to ensure supply, and to avoid malicious speculation and irrational price surges. With production spluttering, China has become increasingly reliant on imports, in a rare development that’s drained global supplies of the usually abundant metal.

China is also releasing state reserves to boost supply, but with producers struggling to increase output, many analysts see the market remaining tight in the months ahead.