In Depth: The Congo Mine That Could Feed China’s Vast Hunger for Copper 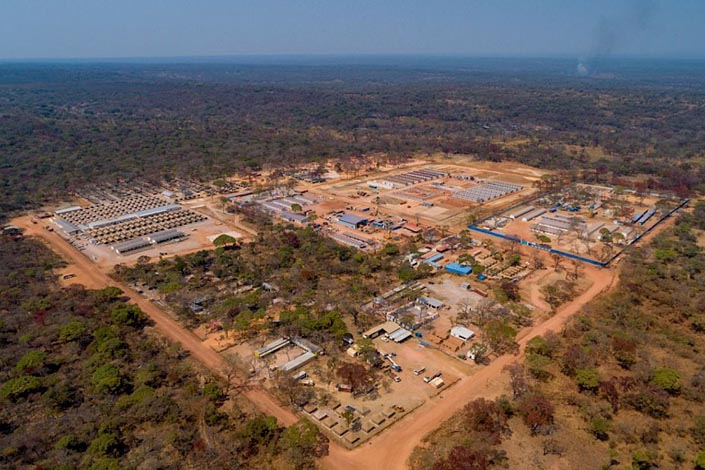 The Kakula Copper Mine in the Democratic Republic of Congo. Photo: ivanhoemines.com

The mine, operated by a Chinese-Canadian joint venture, is expected to produce 200,000 tons of copper a year in its first phase, rising to a peak of 800,000 tons or more by 2029, with a majority of the output to be smelted, processed and sold in China.

As China’s economy recovers from the domestic Covid-19 epidemic it has regained its immense appetite for copper — a key indicator of a nation’s economic health. In June, the government announced that it will release copper, zinc and aluminum from its national strategic reserves for the first time in more than a decade.

Located in the Central African copper-cobalt ore belt, the Kamoa-Kakula mine project is one of the richest copper ore discoveries of the past 20 years. With reserves of more than 43.69 million tons, the area holds the equivalent of around 37% of China’s copper reserves.

The project has taken six years to start production, and costs are as high as $2,500 per ton, if production, sales and transportation costs are factored in. But getting the mine up and running should all be worth it for investors, with prices of copper on the London Metal Exchange sitting above $9,400 per ton this week.

Those familiar with the matter told Caixin that in the mining industry, going “from 0 to 1” — getting a mine up and running — is much more difficult than going “from 1 to 100.”

The investors in Kamoa-Kakula can only hope they are right, amid tough funding demands and a complicated relationship between the joint venture partners. Pressure to succeed is enormous. According to the China Mining Association, the failure rate of China’s investments in overseas mines during the Eleventh Five-Year Plan period (2006-2010) was as high as 80%.

China has been scouring the globe in search of raw materials since the start of the 21st century. Almost 80% of the copper the country needs for infrastructure, manufacturing and energy projects comes from overseas.

There are few opportunities for Chinese companies to operate in developed mining areas such as Canada and Australia, leaving it with more challenging terrain. Moreover, Chinese companies are facing a steep learning curve of adapting to overseas conditions due to differences in regulations, reporting standards and technical procedures.

While the proportion of China’s total overseas mining exploration investment going to Canada, Australia and Southeast Asia declined significantly from 22.5% in 2011 to 5.6% in 2020, investment in Africa and Latin America increased from 10.1% in 2011 to 18.7% in 2020.

Analyst Bo Shaochuan, chairman of consultancy Mining Circle, believes China has a stronger “risk profile” than European and American investors when it comes to places such as the Congo, which faces potential political turbulence. This appetite for risk may have led China to invest in a copper mine on the outskirts of Kabul, which it has said it now wishes to revive.

Hunting for copper and funding

Named after two sections of the ore-rich belt in the southern part of the Democratic Republic of Congo, the Kamoa-Kakula mining project is regarded as a case of “counter-cyclical investment and development,” starting at a low point in the economic cycle and building up to become a $1.3 billion enterprise with rich profit prospects.

The Kamoa-Kakula mining project is one of three projects being operated by Ivanhoe Mines Ltd. in southern Africa. The early-stage mine developer is headed by Robert Friedland, who was once Steve Jobs’ guru.

After success with mining projects in Canada’s Voisey’s Bay and the Oyu Tolgoi copper-gold mine in Mongolia, Ivanhoe won prospecting rights at the Kamoa-Kakula mine project near the Congolese city of Kolwezi in 2003, finding copper in the northern segment in 2008.

Ivanhoe was a typical junior mining company, “burning money” at the feasibility stage of the project, according to Bo Shaochuan. “Ivanhoe was willing to sell a large proportion of company and project shares in order to raise funds.”

When Citic Metal Co. Ltd became an Ivanhoe shareholder in 2018, the Canadian company had no funds to invest in the development of the project and discover the full extent of its reserves. The company could only find limited funding from European and American investors for exploration, drilling, and feasibility research.

Bo said Friedland was “patient and spent time communicating and negotiating [with his Chinese associates]. “If he hadn’t been, the joint venture wouldn’t have got off the ground.”

Friedland had known Chen Jinghe, top geologist for major Chinese player Zijin Mining, for 20 years which eased the path for Zijin Mining’s initial investment in Ivanhoe in 2015. Zijin’s management subsequently joined in the joint venture project and the team together tapped the southern part of the project, where rich resources were found. Four years later, in October 2019, Zijin Mining increased its holdings in Ivanhoe, becoming the second largest shareholder.

Control of the joint venture’s direction

“Everyone hopes that this project can be completed, be put into production, and generate benefits as soon as possible. Everyone’s goal is the same,” Chen emphasized.

In reality though, the Chinese and foreign shareholders have been engaged in a complex game throughout their cooperation.

Under Ivanhoe, the development process was shaped by Western ideas on corporate governance, and design was to be entrusted to a Western third-party consulting agency. Only after environmental protection and safety issues were settled and funds were in place, would implementation begin. From a Chinese standpoint, the slow-paced approach was considered lack in efficiency.

Zijin Mining has its own research, design and implementation units, which work together on major tasks at once. Once a general direction has been chosen, the project can advance while research is ongoing. The idea is that the project can be put into operation more quickly and cheaply.

“Can Chinese food ever be the same as Western food? They are completely different in every way,” said Chen Yong, manager of the contracting and supplier team at the mine. He told Caixin that “every millimeter is hard work.”

Wu Yue, a senior researcher at the China Institute of Metal Mining Economics, said that the cooperation between Chinese and foreign mining companies is like an “international marriage,” with “huge gaps in culture, management concepts, and business ideas.”

Zijin has repeatedly emphasized that phase two will start construction in the first half of 2021, earlier than previously expected, and the mine is expected to be put into operation in the third quarter of 2022.

The project has now gathered a host of contractors and suppliers in China, including Zijin Construction and China Railway to undertake technical research, design, mine construction, equipment production and supply.

When finalizing design, procurement and construction of the second phase of the project, the management team debated whether to continue with the Western design company or choose Zijin’s own design institute. In the end, with mediation from Citic Metal, a third-party Chinese company was selected to undertake project design of the next stage.

Correction: The story was updated to correct the ownership of the project and how the project committee members are appointed