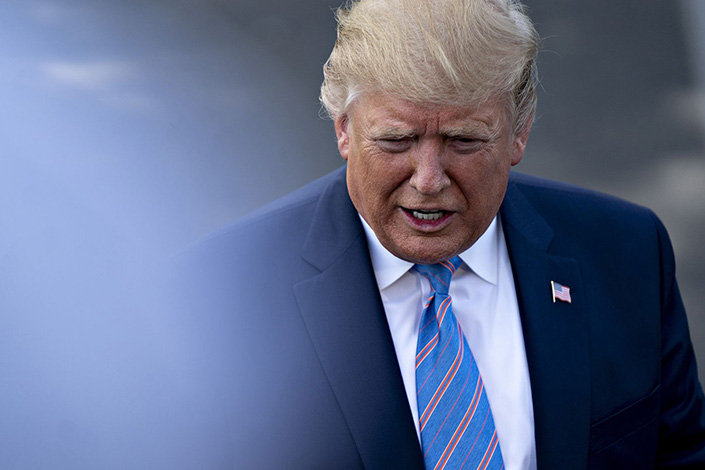 President Donald Trump speaks to members of the media before boarding Marine One on the South Lawn of the White House in Washington D.C. Photo: Bloomberg

(Bloomberg) — A World Trade Organization dispute panel rejected all four of China’s claims against the U.S. relating to safeguard measures that the Trump administration imposed on solar panels imported from Chinese manufacturers.

China didn’t establish that Washington’s safeguards against imports of certain crystalline silicon photovoltaic cells are inconsistent with the WTO’s rules on the measures, the Geneva-based body said in a report published Thursday.

Then-President Donald Trump announced four years of import caps and tariffs on panels after a certain amount is brought in — so-called tariff-rate quotas — in January 2018. That was in response to a trade suit filed in April 2017 by a bankrupt U.S. solar manufacturer that argued it had been harmed by a wave of cheap imports, mostly from Asia. The U.S. International Trade Commission agreed in October that year, paving the way for Trump’s decision.

Bloomberg data show that Chinese suppliers flooded the U.S. solar market with panels at the end of 2017 as customers sought to avoid paying a 30% import tariff.

U.S. Trade Representative Katherine Tai welcomed the ruling. “We must make historic infrastructure investments that unlock the full potential of solar power and create good-paying jobs in cutting-edge fields that will help address the climate crisis,” she said in an emailed statement.

The WTO’s dispute-settlement body set up a panel to hear China’s case in August 2019, with Beijing alleging that Washington acted inconsistently with a number of articles in the organization’s general agreement on tariffs and trade.

Among China’s allegations that the WTO rejected was that the U.S. failed to establish the required causal link between the increased imports and the serious injury found to exist.

The dispute-settlement body will adopt the panel’s report within 60 days unless either the U.S. or China notifies it of a decision to appeal.