Taxation Can Be a Tool to Bolster Data Governance Goals, Tsinghua Professor Says

By Yuan Ruiyang and Kelsey Cheng 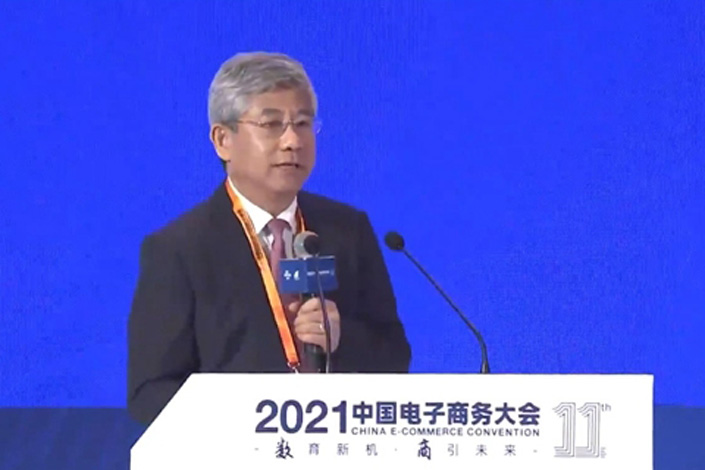 Chong-En Bai gives a speech at the China International Fair for Trade in Services on Friday. Photo: ciftis.org

A prominent economics professor and Chinese government policy advisor has called for authorities to make wider use of taxation to reform firms’ data governance, balancing the rights and interests of consumers, data collectors, developers and those who generate revenue from information they collect.

Data governance is too important to be left to market forces and companies’ self-discipline, Chong-En Bai, dean of the School of Economics and Management at Tsinghua University, told a Beijing ecommerce convention in a speech on Friday. Instead, the government or industry associations should come up with a framework on data usage, he said.

The uncertain impact of data on society means that there is an urgent need for proper governance, Bai said at the China International Fair for Trade in Services, singling out issues such as biometric data theft, big-data enabled price discrimination (大数据杀熟), ownership uncertainty, national safety problems, platform monopolies and technical challenges.

“Data collection has helped realize economies of scale. Large platforms play a pivotal role in our economy and society. If there is a problem with data usage, will it cause systematic risk?” said Bai, who is a member of the Chinese People’s Political Consultative Conference and a former member of the monetary policy committee of the People's Bank of China.

China’s digital economy was worth 39.2 trillion yuan ($6.1 trillion) in 2020, accounting for 38.6% of the country’s GDP and 2.4 percentage points higher than a year earlier, according to an April white paper published by the state-backed China Academy of Information and Communications Technology.

With such a powerful role as an economic engine, Bai concurred with other contemporary economists who argue data is a new and complex factor of production which should be considered alongside the classic economic factors of land, labor, capital and enterprise (or entrepreneurship) in government policies.

According to Bai, when establishing a data governance framework, five main areas should be taken into consideration, namely personal rights, social interests, efficiency, innovation and fairness.

For example, the rule of user consent where all data processors should clearly inform data owners in advance about how they plan to use their information would have a certain impact on innovation and efficiency, but protecting the rights of consumers should take precedence, he argued.

China, which previously was slow to implement data governance policies relative to the EU and the United States, has taken aggressive action in recent months with fresh rules and guidance governing data handling policies of the country's huge internet players.

But Bai said that “there is still a long way to go.”

On June 10, China passed a new Data Security Law, which came into effect on Sept. 1. The regulation requires companies to classify their data into different categories based on risk and protect them accordingly.

Regulators have stepped up scrutiny of tech companies’ handling of user data after a raft of high-profile breaches sparked public outcry over privacy protection. As of June 21 this year, the Ministry of Industry and Information Technology disclosed it had inspected 1.17 million apps (link in Chinese) and found more than 4,000 apps in violation of data collection rules which it demanded companies rectify.

The apps were accused of collecting and using users’ personal information in violation of rules, as well as demanding an excessive number of permissions, among other problems. A total of 329 apps that failed to correct their practices were subsequently removed.

The country also passed its first national Personal Information Protection Law last month, setting strict rules on how companies should treat the personal information gathered and collected from China’s more than 900 million internet users. The legislation, which is based on the principle of informed consent, will come into effect on Nov. 1.