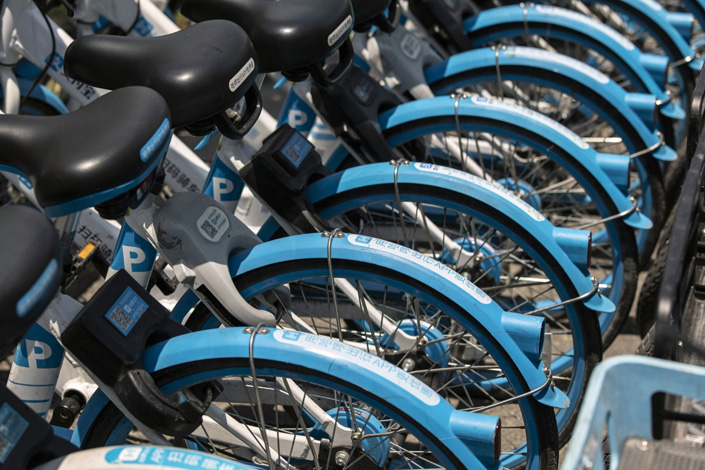 Hello Inc. bicycles sit in a row in Shanghai on April 26. Photo: Bloomberg

(Bloomberg) — Hello Inc., the Chinese bike-sharing unicorn backed by Jack Ma’s Ant Group Co. Ltd., is trying to raise funds at a reduced valuation after abandoning a U.S. IPO, according to people familiar with the matter.

A little over a month after scrapping the planned share sale, the Shanghai-based startup is seeking between $100 million and $300 million in a private round of fundraising, the people said, asking not to be identified as the information isn’t public. Hello is valued at about $5 billion, according to data provider CB Insights.

No deal has been reached yet and the plan and details may change, the people said.

A representative for Hello declined to comment. After publication, the representative said the company is completing a private round at a higher valuation than the previous rounds, and that the affirmation that Hello is trying to raise funds at a reduced valuation is completely false.

The startup, previously known as Hellobike, formally withdrew its registration for a U.S. share sale in late July after Beijing tightened rules for overseas listings by Chinese companies, requiring nearly all of them to undergo a cybersecurity review. That crackdown effectively dashed the IPO ambitions of Hello and various other firms that earlier used to flock to the U.S. for capital.

Hello is one of the few firms to survive the bursting of China’s bike-sharing bubble, which had attracted billions of dollars in investment at its height.